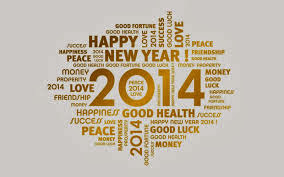 So today's the first day of a brand new year - a clean slate, a fresh start, a chance to start anew...... Whatevvvverrrrrr.
Ignore me, because I suspect that it's the lingering whiff of New Years' past which make me feel a little, ahem, negative about New Year, and actually the entire month of January really, because it always meant a dirty word to me - DIET. 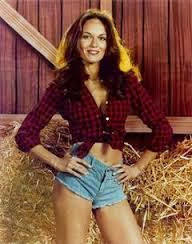 This will be my year - I'd tell myself every January - by July, you won't know me,  I'll be three stone lighter, and wear cut off shorts and a bikini top on holidays, like Daisy Duke with a Belfast accent, ginger hair and blue/white skin.....yep, I've always found that setting realistic goals is the key to success.

Yes, even though I try not to measure my self worth by my
weight anymore, its very difficult not to, especially at this
time of the year, with the relentless TV ads, the quick fixes, and the before and after photos in magazines. So I try and remind myself  that, statistically diets don't work in the long run, and that WeightWatchers and Slimming World and others, are just massive corporations, who make huge amounts of money precisely because of that. But it's a hard concept to embrace when my jeans are tight  and my muffin top is off somewhere livin' it large.

So what's the plan, Stan? Well, in 2013 I discovered that the 5:2 thing works pretty well for me, so I'm going to do that for a couple of weeks, just to restore the old  mind and body equilibrium, while still enjoying weekends and caramel squares on the side. No more Daisy Duke fantasies, no more queuing up to step on a scale, no more carrying my self esteem around on a card with numbers on it. Nope, I'm just all about balance and moderation now ...except of course when I'm not....and that's when the Spanx comes out.


Speaking of balance and moderation, as an antidote to all the December excesses, I've decided to go dry for January this year...starting on the 5th. Don't mock me, I would have started today, only Himself and myself are looking forward to a couple of cheeky nights away, minus the kidlets, so I ask you, what's a girl to do? It still means 26 days, which is pretty much February when you think about it. Yikes! To be honest, the weekdays will be grand - I don't usually partake during the week - but there's nothing quite like that Friday and/or Saturday glass of wine, or three. Yes, I know its mostly psychological, and perhaps herbal tea will scratch that itch, but I seriously doubt it, so wish me luck! 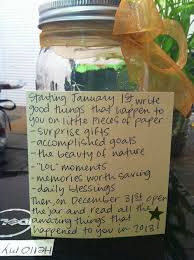 I'm poaching a little idea that's doing the rounds on Facebook at the moment, and thankfully involves no deprivation whatsoever - the 'jar of blessings'. Basically, throughout the year you scribble down on a piece of paper the  little things that you're grateful for, or have achieved, or just  make you LOL, and at the end of the year you take them out and read them all. I've decided to do a family one for the kitchen, and although I can foresee issues such as too large writing on massive sheets of paper, and one or two nosy people rifling through the jar long before Next New Year's Eve, I do think it's worth a try.

(I gotta say though, a jar of grudges might be a whole lot
more interesting to read at the end of the year.
'Ah yes indeed, remember that natty old bunch of flowers from the supermarket you bought me on our anniversary?' or
'How could I forget that special time when you hit the neighbour's gatepost and it cost us 500 quid to fix?' Good times....)

I'm also going to make more time for reading and writing this year.....I know, I know, I need actual plans and realistic goals to make this happen, and honestly, I've done sweet FA over Christmas, but on the plus side, I've signed up for Round 2 of my writing course AND I've a little notebook tucked into my bag for words, snippets and ideas when they occur to me....because that's what proper writers do, don't ya know.....so Marion Keyes and Anne Lamott tell me anyway.

Finally, I just want to say thank you for reading anything I've written over the last year - it means so much to me - and to wish you the very best of everything for 2014. I'll leave you with this gorgeous quote by Neil Gaiman, which puts it much better than I ever could.

"May your coming year be filled with magic and dreams and good madness. I hope you read some fine books and kiss someone who thinks you're wonderful, and don't forget to make some art -- write or draw or build or sing or live as only you can. And I hope, somewhere in the next year, you surprise yourself.”