Two popular words around these parts are 'free' and 'toys'. Put them together, and we're on a winner, so when the folks at Bandai toys asked me to 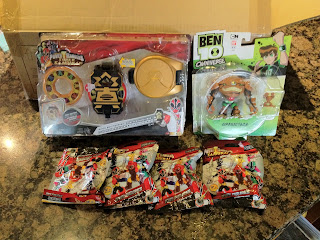 review some of their brand new 2012 toy ranges last week, I jumped, (possibly a tad over enthusiastically), at the chance.
A few days later, when a brown box arrived, word spread fast-at one point there were 10 children (ours and a few of the neighbours) around it, begging me to open it. 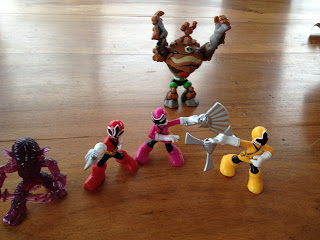 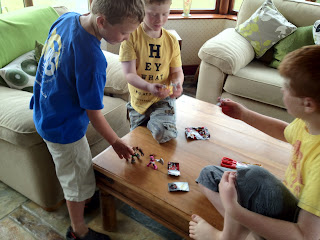 Inside, there was the action figure 'Gravattack' from the Ben 10 Omniverse range (£7.99) straight from the new series starting soon on Cartoon Network.  There were also items from the new Power Rangers Super Samurai range- the Black Box Morpher (£14.99) which makes sounds effects and can be attached to other Samurai items,  and 5 pose able action figures (£6.99 each), also from the new series.
My boys thought Christmas had come early and immediately dove straight in! The action figures were definitely the biggest hit. Although not familiar with the new series', they know Ben 10 and Power Rangers of old, and immediately began role playing games, having the figures do stunts and fight with each other- typical boy stuff really!  What I liked about this was the imaginative and interactive aspects of their play. (It should also be noted that they're the perfect handbag size to head off  those trying supermarket moments...or maybe that's just me!)
The bottom line is, if your son is into Power Rangers or Ben 10, you really can't go wrong with the action figures, but I think that I'd be inclined to give the Power Rangers Black Box Morpher a miss.To me, it just seems gimmicky and was barely played with among all 4 boys. 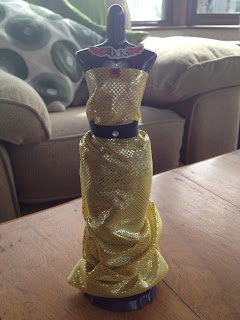 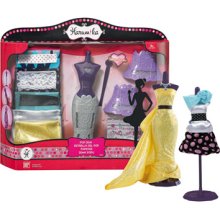 Being the only girl, Anna was the sole recipient of the Harumika Pop Diva Set (£34.99). On the box, it states the age range as 6+, so at thirteen Anna is probably a little old for this, but her burgeoning interest in clothes and fashion meant she actually really enjoyed it. It comes with a dress form with two removable corsets plus a selection of funky fabrics and accessories, so you can design different shaped skirts and dresses.  It was a bit fiddly at first, but once we worked out how to nip and tuck the fabric, it was great fun. It mixes art and craft with fashion, and all the materials and accessories are reusable, so if you hate the dress, just start again! I also liked the fact that the dress form was not of unrealistic Barbie proportions, very important for impressionable little girls. I do think that at £35 it is overpriced , but all in all, it's a good toy for your budding fashionista.
So there you have it-check out these toys and loads more at Bandai toys because  (now don't shoot the messenger!), it's only 111 days till Christmas-eeeek!
Posted by Emma at 09:00