1. I got a tat!!! But, before half of you get all excited and the other half recoil in horror, it was only a temporary one. You see, the idea of getting one is still very much in my head, but I'm a chicken, and a scaredy cat, and not at all sure that I'm ready to grow a pair and get the real deal just yet...if ever. So I wanted to test the water and see how I liked it, safe in the knowledge that it would wear off in a few short days.

It came in a pack of about 10, but I chose the stars for the back of my neck because I was off to a formal last week (first time in 20 years-more on this later) and was getting my hair put up. Loverboy put it on the night before, with strict instructions to make sure it was central, et voila- frump to badass in one easy step! 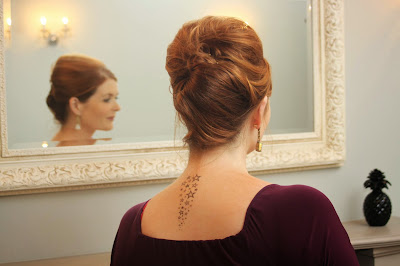 And I gotta tell you, I liked it! I'd even go as far as to say that I felt slightly empowered, but do I love it enough to bite the bullet and get inked ?....Hmmmm,  not sure yet, but in the meantime, I'm away to put a  butterfly stamp on my hip!

2. At the aforementioned formal, I learned something that I could never, ever, have suspected in my wildest dreams. The actual words uttered to me were 'Men in Sinn Fein read your blog!'
Shut the front door!! My mouth fell open because, quite simply, how does one respond to such a momentous disclosure?

Now, obvs, I was immediately dying to ask her for specifics, or was she speaking in code?  Did she just discreetly wink at me, or was I tipsier than I'd realised?  Was she actually saying that Gerry Adams and Martin Mc Guiness, caught up on my latest posts while on a comfort break in Stormont?

I think it's fair to say that on several levels, men in Sinn Fein wouldn't be my most obvious demographic.....or so I thought.  But let's briefly assume that they are and run with it. Well what of the other political parties? The Ulster Unionists, The Alliance party? The SDLP? Who knows, maybe even men in the DUP read it too, and they're just comment-shy ? Think outta the box, peeps- could this blog could be what finally brings Northern Ireland politics together? What makes them say, hey, how about we just agree to differ on this boring old issue and catch up the latest post over a beer? Is that a Nobel Peace Prize I'm smelling... ...international recognition.....a movie deal? *eyes glazing over* Well, a girl can dream but back in the real world, 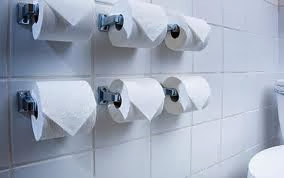 3. I ordered toilet rolls this week....on Groupon! Who knew? There was me thinking  it was just mini breaks and gel nails, unaware that thrillingly, you can get 45 rolls of 4 ply fragranced rolls for £12.95 on there too!

Well, I don't mind telling you it made MY day, because that's a pretty amazing deal by anyone's standards. And we go through a LOT of loo roll around here, of both the fragranced and non fragranced varieties. I even took the time to share  my canny bargain with like minded purchasers on Facebook. But caught up in all the heady excitement  I neglected to read the terms and conditions- Yes, shipping was free, Alas No, we don't bother shipping to Northern Ireland.

Now this isn't the first time I've encountered this issue- its a fairly common  irritating downside of living here in Northern Ireland, and I DO hate to miss a bargain.
But what's MUCH more annoying is the way they phrase it-'Shipping to the mainland only'. Puh-leez! As far as I'm concerned we're ON the mainland right here, with perfectly good and well established shipping and postal routes between here and England in place, thanks very much.
Did I perhaps mention how much it annoys me? Even more than people who say 'hubby' and 'anyhoo' in everyday conversation, and that's saying something. (BTW, if you hear of any good toilet roll deals here in God's own country, do keep me in the loop!)