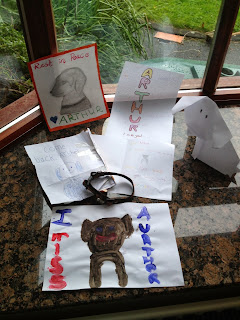 Today we'll wrap him in his blanket and bury him in the garden-the hole has already been dug. Such a sad, abrupt, shocking end for the little black dog who was part of our family for such a short while. Seven months and one day old, he was still a baby, never even had a haircut, never graduated from puppy food.

We'd thought long and hard about getting a dog, or rather, I'd eventually been talked round. I'm not a dog person, not an animal person at all, if I'm honest-it always makes me slightly ashamed to admit that, as though I'm somehow lacking, or born missing a vital piece. Maybe its because we never had a dog at home growing up, or maybe its just me. So I bought the books before we got him, just like I did years ago when I was newly pregnant, not trusting my own instincts, not confident enough to 'go with the flow'.

Certainly not like Himself, who fell hard for the little black wriggly thing, carrying him around like a baby and  putting him up to my face for kisses, while I flapped him away. Definitely not like the children, who let him lick their faces and raced him round the garden, while I worried about training schedules and flea treatments. I should have just relaxed. I thought my 'job' was to monitor his cleanliness and his food intake and his pit stops.  To keep him off the couch and keep the doors closed and take the shoes off him.I thought I'd have plenty of time for all the rest, sure we'd have him for years and years, but if I could just get the good habits in as a puppy, we'd all reap the benefits later. I was wrong.

Like the toddler he was, he didn't see the danger of the lumbering tractor with the trailer behind. It wasn't even on a road, just on the little lane that goes past our house. We don't usually worry about traffic because there's just so little of it. And anyway, I was far more concerned about his infuriating love for rolling in slurry, or barking at the neighbours' chickens. 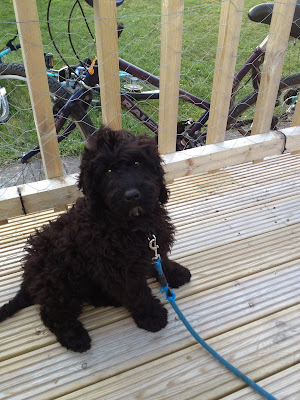 I was still in my nightdress as I ran outside, tasting dread in my throat. The driver's so young, was my thought as he walked towards me, shaking his head. Where those tears in his eyes?
I heard the boys' sobs before I saw him. He'd died instantly. There would be no frantic hope filled rush to the vet's, but no slow painful death either. That was the only blessing.

Then the shock, and with it the tears. I wish I could take away all the children's pain, this first proper brush with loss and the cruel, inevitable dawning of  the slender line between life and death. Himself is stoic, pragmatic even, and unbearably sad.