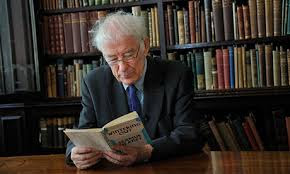 My Father remembers him as a long haired junior lecturer at Queens, then years later, listened spellbound as he read his own poetry aloud.

Later he taught literature, in the same boys' school as my uncle, deep in West Belfast, on the very cusp of the Troubles.

Born in the heart of Northern Ireland, he was a scholarship boy, who went on to win the Nobel prize and count Bill Clinton among his friends.
He was one of us...but all himself... a genius of words that will resonate through generations still to come.  We will never see his like again.

Rest in peace Mr Heaney- I wish I could have met you in person... instead I'll know you through your rhyme.

I sat all morning in the college sick bay
Counting bells knelling classes to a close.
At two o'clock our neighbors drove me home.

In the porch I met my father crying--
He had always taken funerals in his stride--
And Big Jim Evans saying it was a hard blow.

The baby cooed and laughed and rocked the pram
When I came in, and I was embarrassed
By old men standing up to shake my hand

And tell me they were 'sorry for my trouble,'
Whispers informed strangers I was the eldest,
Away at school, as my mother held my hand

In hers and coughed out angry tearless sighs.
At ten o'clock the ambulance arrived
With the corpse, stanched and bandaged by the nurses.

Next morning I went up into the room. Snowdrops
And candles soothed the bedside; I saw him
For the first time in six weeks. Paler now,

Wearing a poppy bruise on his left temple,
He lay in the four foot box as in his cot.
No gaudy scars, the bumper knocked him clear.