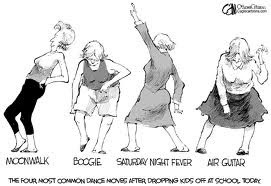 1. First week of term down and its been a busy one. This year, it's two at the 'big' school , two at primary school, and the wee man's starting Nursery. Did you pick up on that last milestone I just casually dropped in there? The nursery part? Yes indeed, its a biggie alright but I'm just about managing to hold it together... in a 'lovely quiet house with freshly brewed coffee and uninterrupted trips to the loo' kinda way!

Heres the thing, he's SO ready for it, I'm SO ready for it and let's face it, thus far it's only been a frickin' hour a day anyway, (building up to the grand total of two and a half hours the week after next-Yay!)

It's certainly breaking us both in gently, before the more significant leap to P1 next year, and truthfully, in my typically thran way, I was both delighted and somewhat miffed at how well he's settled. My Psychology training tells me that his skipping off happily illustrates a secure and happy child, but the contrary mammy in me would definitely have appreciated the odd trembling lip or clinging hug , thank you very much.

It's funny how things change though- four years ago when Rory went to nursery, I would have been weeping at the nursery door on a daily basis if I hadn't been pregnant again with Luke, and I remember pondering how I'd know when I was ready to move on...and now, for the first time in over fourteen years, I know that you just do... so this is all kinda new and exciting, and scary and liberating for me, all at the same time.Wish me luck Dudettes!

2. We're having a party this weekend, and no, its nothing whatsoever to do with the last point- it's a 'We're NOT moving house after all (for now anyway) Party' but really, it's just an excuse to have good friends and family over to eat, drink and be merry! As a treat, we've even booked caterers to come and make savoury and sweet crepes for everyone-it'll be just like the continental market without the hats and gloves- and even though I DO feel a teensy bit guilty cos it feels a bit like cheating, I'm also thinking 'Feck it! I'll just have to be queen of the bubbly and playlists instead!

3. Speaking of which, jsut in the nick of time, we've (sort of)  finished our sitting room, which until a few months ago, had bare walls, a concrete floor and a hole for a fireplace. Yep, only eight years here and we've finally done it - 80% anyway- and I'm chuffed to bits! Here's a little peek...and special mention must go to  Gumtree and Annie Sloane paint for keeping the costs down!

Email ThisBlogThis!Share to TwitterShare to FacebookShare to Pinterest
Labels: back to school, Ireland, moving on, parenting, Stuck like Glue