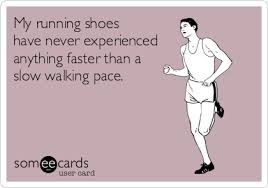 So, last night I reached week 8, day 2 of my couch (potato) to 5k program, and ran for 28 minutes without stopping or dying..... How do you like them apples? Yep, the eight week program may well have taken me more than twelve weeks, and I may only just be meeting the definition of running, but for me this is MASSOOF!

You see,  naturally I'm an eater not a runner (sorta like, I'm a lover, not a fighter, only less worthy), and I arrived late to the party when it came to exercise of any kind. The truth is, I was very overweight for a very long time, hugely self conscious and pretty crap at everything in PE really, so I simply avoided it altogether.

I should come clean and tell you that that doesn't run in the family- I'm the eldest of six children and the others are all super fit and super trim-I'm the yin to their yang, if you will.  In fact, I'm the only one who HASN'T run a marathon, and one annoyingly sporty brother has even run 12 of them. (Freakshow). And I'm totally fine with that- NO worries being left out of THAT particular little Venn diagram-thank you very much. Each to his own, and major kudos to anyone who feels the need to run 26.2 miles, but personally my knees and pelvic floors will pass.

So anyway, eight years ago, after decades of avoidance, punctured by pregnancies and short lived bouts of group exercise classes (step aerobics, anyone?),alongside yet another Weight watchers sign up, I got into walking. I mean obvs I'd always walked,  (why did I feel the need to clarify that, why?), but now it became a regular  3 mile gig, 3 or 4 times a week. And this time, instead of giving up like I always had with everything else, I kept going and I loved it- still do actually. It clears my head, calms me down, and helps me think. It also doesn't hurt that I tend to go early in the morning, giving the added bonus of leaving the breakfastandgettingreadyforschool bedlam with Loverboy. Sweet..

Then this summer-I'm not quite sure why- I felt the need to step it up a bit. Maybe I was a bit bored, maybe I was encouraged by several friends who ran a little and seemed to love it, maybe I  wanted to test myself, maybe I'm old enough  to finally not care what I look like, or maybe I realise that no one gives one anyway!

The major issue was that physically and mentally, I'd always just assumed that I couldn't run, and indeed I never actually had. I literally only had to think about running and my breathing was all over the place and the mantra 'YOU can't do this!' was on a constant loop in my head. But I started the Couch (Potato) to 5K anyway- the first time that I ran for 3 minutes without stopping, I thought I was going to expire on the road then and there.
Then my good friend J, also new to the running lark only much less rubbish, advised me to slow the running parts right down-although in truth, any slower and I'd have been walking on the spot. Gradually though, it DID help me get control of my breathing and my shitty mental attitude. There were days that were awful, and weeks I repeated because I couldn't face stepping up to the next level, but little by little I began to improve. And yes, I know its all relative, and for so many it probably seems such a meagre little achievement, but when those downer thoughts flood my mind I try to tell myself  not to compare and despair....and sometimes that works and sometimes it doesn't.

I knew I'd keep at it when last week I invested in a few running essentials- (No, not Tena Lady, SmartArse) but a neon green t shirt and proper leggings. I even bought a pair of running shoes (neon green and pink- matchy matchy) and a black arm holder for my phone. Up to that point, I'd been sporting my old velour track suit bottoms that flapped around my ankles, and had to be constantly hauled up mid run, with grotty old t shirts that belonged to Loverboy. Oh the transformation, and you wouldn't believe the difference the new gear's made too! I'm exactly like a whippet now ....NO not really, but it does LOOK so much better.

Oh and alas no, I haven't lost any weight yet, but I HAVE  been eating and drinking for Ireland all summer long, so I'm not overly surprised. I'm secretly hoping that once the kids go back to school, and I get back on my 5:2, and keep going with my running/plodding I might shift a few pounds. And that would be great, but honestly, even if I don't, that's OK too. Because as long as I'm working at getting the balance right health wise, I'm going to try not to waste any more time beating myself up for being the curvy size 14 that I am right now, and not the slim size 10 I probably  never will be anyway. There's that compare and despair again! Happy weekend sweeties,
Peace Out,
Emx