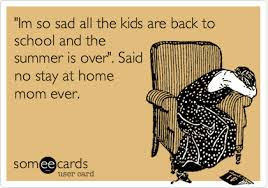 1. I don't know about you but I'm kinda over the whole summer holiday gig now...which really means that the kids are doing my head in and I can't wait to get them back to school.
The continuous  bickering  in the minivan, the constant snack requests, the wails of  'There's nothing to do!', the late nights, the cranky mornings-seriously, at this point, I'm  considering putting a few of them on eBay.
And this week, the icing on the cake has been the delightful outings to procure new school shoes and pencil cases and lunch boxes, which seems to bring out the best in ALL of us.
'Stand still and let me feel your toe. Wiggle it. No, you can't have a treat- sure aren't you getting new shoes! Stay there and don't you even THINK about moving again. That's it! Out to the car- NOW!'
Yes indeed, it would seem that the transformation into my mother is now complete.

2. Speaking of which, (I DO love it when a link comes together) tomorrow we're off en masse on a family weekend to a hotel near Dublin. The entire crew will be there- the 'rents, my three brothers, two sisters and all their respective spouses. Chuck in the seventeen grandchildren (+2 on the way) and we're a bona fide pop-up village! Most importantly, there's a pool and a playground and best of all no cooking for three whole days!
Breakfast alone, we'll get our money's worth- the last time we stayed in a hotel, the waitress actually came up and congratulated me afterwards, on how much grub my boys had managed to put away. I'm  paraphrasing only slightly as she basically said 'Well done on having SUCH greedy children...and so many of them too!' Now, what could one reply except with a gracious thank you?

3. You will not believe the massive prat I made of myself earlier on...('Au contraire!' I hear you say).
The phone rang and because we no longer have caller ID, (we moved providers- what  a bummer- picking up the phone is like Russian roulette), so I made the rash decision to answer it.
The timing wasn't good- Luke was on the loo and had just produced the major goods so was duly awaiting my wiping expertise, and I'd briefly nipped into the kitchen for wet wipes when the phone rang and I picked it up.
That was my first mistake- in retrospect, I SHOULD have let it ring ....but what if it was important ....which indeed it was, because on the other end, was the assistant bank manager to discuss mortgage details. Now, she's really friendly but STILL our bank manager and very definitely NOT my friend, but that didn't stop my motor mouth working overtime.
We'd chatted briefly, but I was distracted and very much aware of my task in hand so to speak, so I said to her,  'I'm sorry M but I'll just put D on to you- I'm actually right in the middle of wiping a bum.'
Oh God. ....Cue stunned silence.... and then to make matters worse, I followed up by hastily reassuring her that of course it wasn't mine.
It was awful and I instantly knew that there was no way back from that, so I  wordlessly passed the phone to Loverboy, who was understandably open mouthed with a  'WTF!' expression on his face. It was, in the words of son #1, an "Epic Fail'.... ....but wine will help.
Have a great last weekend of the summer, my lovelies xx
Posted by Emma at 19:08