Stig of the Dump

I may possibly have mentioned to you before about Rory's penchant for recycling, up cycling and reclaiming? His innate ability to see an item's beauty and potential where others see only junk? His love for all things vintage?

Yes indeed, nobody enjoys a post Mass hunt through the skip in the local graveyard more than Rory, and our resident dumpster diver has unearthed many a precious jewel in the process. That little bunch of silk flowers on the kitchen windowsill?
Where some might consider them garish, or be put off by their morbid back story, he handed them to me proudly, incredulous that anyone could discard such treasures and thrilled that he had been the one to unearth them.And from time to time  (usually as I'm pondering how I might sneak them into the bin, he gazes at them, eyes shining, and says something like, 'And Mummy, the really great thing is that they'll never die!'......Yipee. 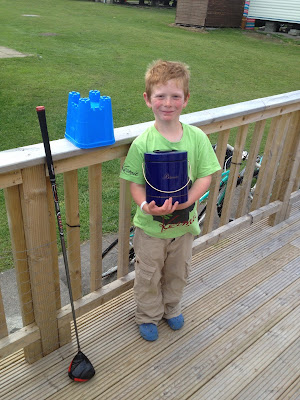 Well, At the Caravilla this summer, he discovered a new hunting ground, better than any skip, a place that evolves and renews itself daily, a nirvana with treasures beyond compare just ripe for the picking....where else, only the caravan site's recycling bins? So Rory knuckled down, and graduated with flying colours from being an occasional dumpster diver, to being a fully fledged bin hoker... and as you can imagine, I'm so proud.
I  should have guessed the moment he began eagerly requesting the thrice daily job of emptying the bin under the sink, and then taking ages to return. I should definitely have clocked  him sidling innocently in to stash another 'find' under his bed.A twisted slinkie, a cracked golf club, a bucket with a missing handle, an old tartan dog lead, a scuffed biscuit barrel-these were the result of just one recent day's foraging.

But, the increasing pile of  let'sjustcallit junk, his growing reputation as a bin hoker, not to mention
his grubby little hands, prompted a serious talk about hygiene and germs and more productive ways to spend ones time on holiday....the biscuit barrel stayed though.... it IS vintage Brabantia, and now it's good as new and full of wagon wheels. Go Rory!