From You to Me... A Journal


My mum said recently 'I wish that I'd asked her more about her life when I had the chance. You think you've all the time in the world...then suddenly you don't.' She was speaking about her mother who died on 12th July 1973- my 2nd birthday as it happens- and her wistfulness was prompted by an upcoming family gathering in County Mayo last month. Did you know that this is the year of The Gathering in Ireland?
'Throughout 2013, Ireland is opening its arms to hundreds of thousands of friends and family from all over the world, calling them home to gatherings in villages, towns and cities.'

My mum's family gathering had been planned for ages -emails had been sent months in advance requesting information and photographs. Her mother had been one of 14 children, all born towards the end of the 19th century in County Mayo near Ballina so there was loads of work to be done!
Anecdotes, memories, stories, old pictures were sent from all over the world and compiled into a booklet by a cousin and the weekend was grand! There was a lunch, a dinner, a Mass, even a bus tour of the family sights that culminated in a drink in the old family pub.
It was declared a resounding success by all the attendees, and later when I read the booklet and heard about the weekend, I wished that I'd been there too.....and then it made me think about my own parents, and their stories and how little I really know.

Which is why, by complete coincidence, when I got asked to review a journal from 'From You to Me' I jumped at the chance. These are gorgeous, hard backed journals, priced at only £12.99 and are specifically designed with about 60 questions to prompt stories and memories. You can buy them for parents, grandparents, brothers, sisters, children and friends- there's even one for favourite family recipes! I chose 'Dear Mum' because given her own recent gathering, I knew we'd  both be on the same page...'scuse the pun... so to speak....if you will. 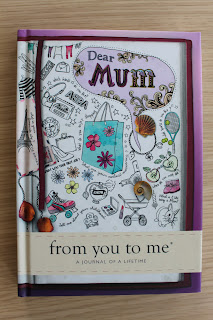 A random example of the questions are 'Who was your best friend as a teenager..and why?', 'Tell me about a memorable piece of music that you and Dad had 'just for you', 'What was I like as a child?', 'Tell me about the dreams you have for your life?', 'Describe some of the favourite outfits you wore as a young woman'- but there's literally loads more. Some of them I might have thought have asking myself, most I definitely wouldn't, but all are carefully chosen to draw her out and tell her story. 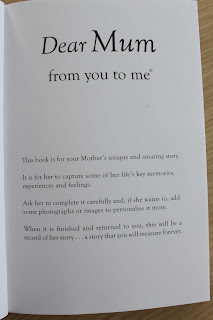 I've been giving it a bit of thought, and given the fact that Big Anne-she who also answers to Mummy-hardly ever sits down, I suspect that despite her best intentions, a combination of all those pages and her unerring tendency to nod off when she does put her bum on a seat,  may possibly limit her journaling progress....which is where yours truly comes in.
Anyway, I think that she'd definitely enjoy the process of being 'interviewed' more- the interaction and the craic of it...with the added bonus of me doing the writing part. Although now I think of it, I suspect that I'll enjoy it myself...sharing a glass of wine and a bunch of old memories with my mother sounds like a pretty good time  to me....a sure sign that I'm getting old?
Or maybe I just know that none of us will be around forever, and that journal may someday be filled with stuff  that I don't ever want to forget. I'll let you know how it goes, and if you DO like the idea of it, and really how could you not!?, check out the whole range at From You to Me. xx

Email ThisBlogThis!Share to TwitterShare to FacebookShare to Pinterest
Labels: County Mayo, family tree, From You to Me journals, The Gathering Ireland