Bonds and Dogs and a New Name 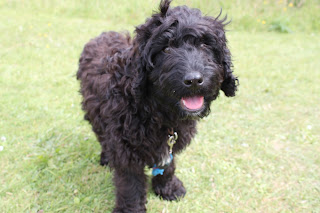 Well, he's been a member of our family now for a whole month, and truthfully? It's been a steep learning curve...mostly for me. I've dealt with it by doing what I usually do when I feel a little out of my depth and more than a bit insecure... I read as much as I can on the subject, listen to all kinds of advice, and then try and do it perfectly.

But exactly like child rearing, I'm learning that you can read all the theory and get all sorts of wisdom from Mr Google AND the rest, but there comes a point when you just have to jump right in, trust your instincts, make your mistakes and make it up as you go along.

The problem is....and all you  animal lovers should look away now....I'm not sure that I have it in me. The dog loving gene. There, I've said it! I'm pretty much including all animals in that shameful confession-in my life I've never bonded with so much as a goldfish...ever. I can just imagine the shocked disbelief on your face right now and I can't say I blame you.

I did have my  pre-dog suspicions - I just sort of hoped that it would be like having children - once you had your own you'd finally 'get ' what everyone was going on about....but so far, not so much. Don't get me wrong, it's not that I hate him (you'll possibly be relieved to know), I actually quite like him in a detached 'Aren't you a great wee fella there in your crate!' kinda way, but not in a 'licky face, jumpy up, kiss with tongues' kinda way.  And while I'm on the subject, and I may as well be hung for a sheep as a lamb, I'm SO not into the smell of dog, especially wet dog ...dog breath...and dog farts (in the car, ALWAYS in the car!) Does this make me a bad person? Don't answer that.

Thankfully though, I'm in the minority around here. The kids love him and yes, the novelty may have worn off in regards to scooping the poops, but he's definitely one of the gang. And Loverboy? What can I say except that little pup is a sixth child to him. The accidents, the smells, the early mornings, the endless shoe chewing-it doesn't seem to matter one bit. It's a one man and his dog love in, and despite the fact that it makes me more aware of my own shortcomings, it also convinces me that we've done the right thing. And anyway, I'm quietly hoping that as we get more used to each others little ways (read-he learns who's boss!), we'll bond a bit better too. I know it's too late now for love at first sight, but maybe we'll have more of a slow burn thing going?


Oh, and just one more thing before I leave you with a few cute pictures to illustrate that I'm not a totally heartless and unfeeling cow. We called him Coburn - a family surname on my side and it was chosen as a loving gesture, a way for my children to know their heritage and to keep alive a name that means a great deal to me. Not even for one second did I think that it might be regarded by some as a slight...and yet it has..and for that I'm sorry.

So now he's getting a new name, which I'm sure he'll learn in time, and the children will soon stop asking why, and I'll learn to live with the fact that despite my best intentions I somehow got it wrong, but sure isn't the shine's off it anyway so let's just start anew.

Therefore, in lieu of his shade and inspired by the strong black stuff, say hello to Arthur for me!(Guinness just seemed too obvious!)....and that's all there is to say about that. Emxx 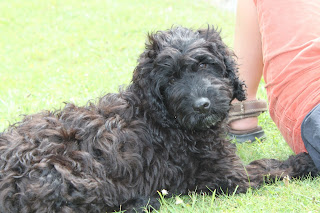