1.Straight in at number one is 'New puppy - the highs and the lows!' For example, I know that you'll be interested to hear that we've decided on crate training and my extensive investigations into pet insurance-until last week, I knew less than nothing about both!

We also had our first trip to the vet's for his injections - God bless my cousin John in Cedar Grove Vets who's keeping me right and not taking advantage of my puppy anxiety.... even though he's fully aware that I'd sign up for/buy just about everything dog related right now, to Loverboy's obvious relief, he calmly talked me out of most of it.

The thing is, I do understand that I'm being an absolute melter about it all... but I can't actually help myself. I knew things were bad last weekend, when two well meaning friends pulled me aside to remind me that it was Saturday night ,we were out on the razz, and therefore I was to immediately cease and desist talking about pet insurance because I was in danger (too late?) of becoming a complete bore.... Hey, it stung a little ...but the wine eased the pain, and anyway I could totally see where they were coming from. Intervention anyone?

2. The seasonal issue of teachers' presents- pitching them just right to avoid the 'tightarse mammy' tag, while not appearing TOO blatant at overcompensating for a certain son's untidiness/ daydreaming/ tardiness issues.

3. Our ongoing home improvements... which should be marginally more interesting/less dull than it sounds. A new carpet went down today, five pairs of curtains are waiting to be hung and the glass knobs WILL be attached to my up cycled, shabby chic coffee table by tonight...I thought I even might post a few compliment fishing pictures before the weekend?

4. Packing for the Caravilla- for seven plus dog. What a joy! There's already an overflowing Ikea bag stashed with, among other things, custard creams, toilet rolls, a dog lead, a scuba mask, DVDs, factor 50 sun cream and a stack of raincoats. (It's Donegal after all). But the real question on everyone's lips is- will our minivan and trailer cut it this time, given all of the added paraphernalia our 4 legged friend brings?
Computer says no, so it's looking very much like we'll be travelling in convoy ('Breaker one-nine, breaker one-nine. This here's the RubberDuck,  10-4'.)
And actually, now I think about it, I believe I'll do the decent thing and drive the other car... just so that Loverboy can enjoy a good stretch of quality time with Duffy's circus in the back. 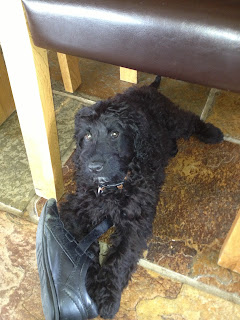 It's a real bummer that I don't have time to write any of those posts but I've a fireplace to wax before the school run, so instead  I'll leave you with the view at my feet right now, which is surely proof that, despite my pet induced panics, there are little moments of bonding just like this one- me, Coburn and Jude's old school shoe.
Catch ya later, Emx
Posted by Emma at 16:29