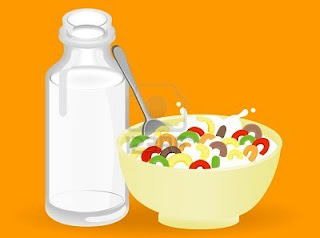 It would be true to say that I've had better Mondays. It began with a little voice in my ear whispering, 'Mummy, the tooth fairy forgot to come'. Bugger bugger bugger. I blearily opened my eyes to peer at the disappointment in Rory's little face and wanted to shut them again.
'Don't you worry, the Easter holidays are coming so there must be a back log. She'll DEFINITELY be here tonight, you wait and see.'
I'm not really sure what's going on with Rory's mouth at the moment, but the tooth fairy has her feet run off her for the last month or so. He is literally losing a tooth every few weeks, with the result that he now has more gaps than teeth. So, picture bloody perfect for the fast approaching family weddings and Holy Communion then!
Then, Jude came in to inform me that there was no milk for the cereal. Not. A. Drop. To Jude, for whom cereal is a food group all on its own, this was hard to take in.
'Well, could Daddy not go and get some?
'No he can't, not this morning.'

'But why not?'
There was an edge of desperation in his tone now, and he was actually beginning to wring his hands.
'Because daddy is sort of busy this morning.'
'But Mummy, where IS Daddy and why can't he get the milk?'

'Well, if you really want to know, he's sitting in the car at the top of the road reading a magazine.'
Yes, you really did read that right. For after dropping Anna off to the school bus at 730am, he parked the car, took out his magazine and enjoyed a spot of 'me' time for, as it turned out, two hours. But not before thoughtfully polishing off the end of the milk for his own cereal first.
Meanwhile, Jude worked his way through bafflement, (What! Why?), to denial, ('Maybe there IS some milk and I just missed it'), to bitter disappointment, ('I just can't believe this is happening to me'), and finally to acceptance, ('I suppose pancakes will have to do, just this once'.)
I grumped about a bit, organising the boys for school, mildly annoyed at not being able to walk off that caramel egg I'd consumed at 10 o'clock the night before, and I don't mind telling you, the mental image of Himself chill-axing, with the seat reclined and a bellyful of milk was hard to take.
So how did it come to this, I hear you plead? Well now, to answer THAT, I'll have to rewind to Saturday morning, or actually to even further back last week, when I decided to clear out all the wardrobes of Winter clothes. Hours and hours it took me, and when I'd finished, there were piles of bags, about 10 in all, bound for various destinations. The best quality stuff was organised by age and gender and earmarked for various younger cousins and friends. There were bags of shoes for a shoe appeal in Africa, (for which Loverboy felt the need to unhelpfully query whether my red patent wedge boots would be fully appreciated, or even particularly practical. As it happens, despite appearances they're VERY comfortable.)
The other bags- mostly well worn clothes that had already been passed down through my boys, and the adult clothes, were ready for the St Vincent de Paul dropoff bin at the top of our road. Mindful of the number of bags, and the potential for confusion, I had placed all the bags for charity on the landing, while all the Belfast bound bags were safely in the back of my minivan. Then, on Saturday morning, I asked Loverboy to bring the charity bags to the bin at the top of the road, and although I knew I was labouring the point a fair bit, I cautioned him several times to make sure the charity bags were kept seperate from the family bags in the boot. And he did. I know this because I surreptiously watched him put them into the car - I just couldn't help myself-so feeling reassured, I watched him drive off.
Oh no! Surely not! He couldn't have, I hear you say! But oh yes, indeed he could and did. For reasons, I still cannot fathom, he somehow managed to put several of the wrong bags into the charity bin, before realizing his gargantuan mistake. Apparently, at that point he then did everything he could, save climbing into the bin, to retrieve the bags. To no avail for the damage was done. To cut a long story short, after bracing himself for my incredulous wrath, he managed to find out when the van came round to empty the bin, and yes, you've guessed it, it was Monday morning. So there you have it- after two hours he ended up retrieving the bags, I got the kids to school, stopping to take the money shot on the way, and bought more milk. Then later on, I squeezed that walk in and have it on good authority that the tooth fairy will definitely be making a stop here tonight too, So all's well that ends well. Happy Monday y'all! Emmax
Posted by Emma at 17:48