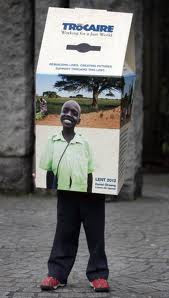 So yesterday was 'Fun Day' at school- an annual charity day, completely focused on raising money for Trocaire and eating shed loads of chocolate. The kids get involved with all sorts of fund raising activities- some traditional, others less so. For starters, Rory's class had a Sponsored Spell, and Cormac's a Sponsored Jog, so the night before,and in an effort to make the sponsor forms look less empty, I 'encouraged' (read hassled) them to sponsor each other.
'Come on now, it's all for a good cause- bring down your money boxes. And if you sponsor him, he'll sponsor you-everyone's a winner!' Just one little bonus of a big family- from forlorn to presentable in one easy step!
Then, of course, there's the very popular selling of buns and cakes, or this year in Cormac's case, shop bought Rocky bars.
'But mummy, everyone else is selling chocolate rice crispy buns and X's mummy even made chocolate cake with mini eggs on top!' '
'Really? Good for her. Take the Rocky bars.'
There's the popular and tricky 'Guess the number of sweets in the jar' and 'Guess the name of the teddy bear.' We've learned the hard way to put strict secrecy guidelines in place with this one, since at a previous fun day, Jude happened to 'drop a hint' to his cousin, who then 'randomly' guessed 'Lancelot' correctly and 'won' the Easter egg. Unsurprisingly, there quickly followed outraged cries of 'Fix!'
This year, I was a trifle bemused to hear that Jude, who as far as I know has never actually been on a skateboard in his life, was part of a core team giving 'lessons' -an ambitious, innovative and, as it turned out, fairly successful fund raising idea. It just goes to show that you should never let the small issue of a lack of knowledge hold you back!
There's the tombola- a great opportunity to guiltlessly 'move on' those little unwanted gifts, and I'm obviously not alone on this one. Last year Cormac came home a little disconcerted having just 'won' a travel iron, while Jude really hit the jackpot with a very useful shower caddy.
There's also the much loved jumble sale, which on the face of it looks like a chance for a clear out, but actually what inevitably happens is that the kids buy back their own tat and lots of other people's as well.
'Oh excellent-What a big bag! I just can't wait to see what you've bought...'
Although it has to be said that this year I really struck gold, because my ever thoughtful and generous Rory,(who didn't actually buy anything for himself.. except buns but they don't count), put practicality first and presented me with this lovely new colander. 'There's only a wee bit of rust on it, Mummy!'

He also brought this activity center for Luke, and actually after a good scrub, both were as good as new. Gotta love Fun Day!
Posted by Emma at 08:29