Slurry- What's not to love? 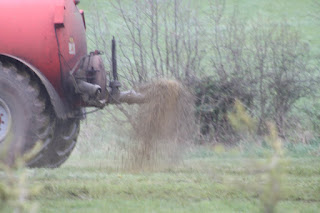 As you may have gathered by now, I have something of a seasonal relationship with rural life. During the Winter, I grow increasingly homesick for the city, so inevitably by February Country Livin' and I are on the rocks -'This isn't working anymore, we're just too different. It's not you its me!' Then, Spring creeps in and seduces me all over again with it's longer days, it's daffodils, it's frolicking lambs, and its new life everywhere, and suddenly I remember the good times, and the fun we had together, and then I'm falling in love again...at least until September.
Yes indeedy, this renewed Springtime lovein would be just about perfect if it wasn't for the annual Slurryfest that ramps up about the same time. I must admit, that when we moved out to the sticks six years ago, I was such a townie that I didn't even know what slurry was! I remember this all too well, because shortly after we moved in, a local farmer,(who was renting the few acres that surrounds our house on THREE sides, called at our front door. He asked me in a friendly,chatty manner if I'd mind if he went ahead and spread slurry on the land. Flattered that he would call to discuss his farming plans with little old me, I warmly encouraged him to go right ahead. (Work away, my good man!). But later on that night, I bitterly regretted my lack of agricultural knowledge, as I wept, dry heaved, and called that pleasant farmer every name under the sun, vowing our immediate return to Belfast.
In hindsight, perhaps my virginal city nose WAS unprepared for such a violent assault, but just last week I was 'forced' to scupper the slurry plans for our field because we had a bouncy castle booked and friends coming round. This is 'Country entertaining 101' right here People -'Under no circumstances host a party downwind of a recently slurried field.' But Loverboy, guilty at the veto, overcompensated to my horror with 'Next week is fine though, just come on over and let her go till its knee deep!' ...and he bloody did too.
To be fair though, over time I've learned to cope with the foul stench. For instance, I know now to keep all the windows and doors closed, breath in as little as possible, light the fragranced candles throughout the house and NEVER EVER hang freshly laundered clothes out on the line. But I certainly haven't stop noticing it as some claim to, or more preposterous yet, to actually appreciate it!? Let's just be clear here, we're not talking about a fine wine and this is not an 'acquired taste'. Despite this, I've been encouraged on many occasions to 'breathe in the good country air!' Pardon? Are you shitting me?(Sorry!) For never was the expression 'you can't polish a turd' more apt- the gallons and gallons of fermented animal waste sprayed with gay abandon in fields all over the countryside- is absolutely gag- tastic. And just so you know, I DO understand it's importance- shit happens and it has to go somewhere, it's part of the cycle of life and growth, blah blah blah, but it still puts me in a bad mood every time. As an added sweetener, it often ends up on the roads as well thanks to leaky slurry tanks. Only yesterday a good friend had to go and get the wheels and underside of her car washed because she didn't want to end up with it all over her driveway. Apparently her poor daughter was green by the time they got home.
But where were we? Oh yes, the beauty of the countryside in Spring, which has now tragically been overshadowed by my slurry rant. On the upside though, I definitely feel much better getting that off my chest and, right now, it's a gorgeous day out there and there's not even a whiff of the dreaded slurry in the air, so I'm off to live dangerously and hang out the washing.
Posted by Emma at 15:02