I just can't believe he's dead. It was Facebook that first whispered the news to me this morning, and I felt shock, but now what feels like genuine grief. But that can't be true surely? I never even met the man..and yet, I can honestly say that he's been a part my life for years.

I remember watching 'Mork and Mindy' on our big, old TV with the wooden sides and the giant knobs and the funny looking ariel on top.  Repeating, 'Mork calling Orsen, come in Orsen!'  and meeting friends in the playground with the alien greeting 'Nanu, Nanu.'

In 1987, I saw the fabulous 'Good Morning Vietnam' in the cinema and was later amazed to hear that he had ad libbed most of the hilarious DJ patter. (Unfortunately, it wasn't long before a much less funny local DJ began to open his show with 'Gooooooooood Afternoon Bel-faaaaaast.' No....just no).


The truly inspiring 'Dead Poet Society' in 1989 showed that he wasn't only a wonderful comedian, obut a gifted actor too -even now, the 'Captain, my Captain' scene, still gives me goosebumps.

I recall taking my little sisters as a treat to see Aladdin in 1992 with my new 'boyfriend' -I didn't realise how much I'd love it myself, especially the music. I also, strangely enough,  remember surreptiously doling out the sweets  from the bag we'd sneaked in to keep the popcorn costs down.


In 1994, I laughed till I peed and fell  in love with Mrs Doubtfire and San Francisco, and then all over again in the Caravilla one recent rainy Sunday  with the kids.


And they just kept on coming. Good Will Hunting-he won his first Oscar for that,  One Hour Photo, Patch Adams, Robots, Happy Feet and the brilliant Night at the Museum movies- - I saw and loved them all.

We all have our favourite Robin Williams movies-he was truly a talent like no other, and yet like so many of the highly gifted, he was tortured with life long depression and fierce addictions. A man with more success and money than any of us could even dream of, and yet he decided to check out prematurely at the age of sixty three.

How desperately sad it is, that he saw no way out except to take his own life, but the truth is he'd tried very hard to fight his demons. Apparently he'd been working on four different films at the time of his death and had recently returned to rehab 'to fine tune his sobriety', but in the end, the overwhelming anguish and despair he endured for so long was just too much. Please God, he's found his peace at last. 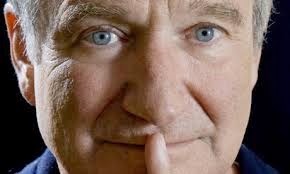 'O Captain! My Captain! Our fearful trip is done.
The ship has weather’d every rack, the prize we sought is won.'
Walt Whitman.

Farewell and Godspeed Mr Williams-thank you for everything.
Posted by Emma at 13:44