1. It's exam week here for the older two so naturally I've been trying to keep them motivated, focused, well rested and well nourished ....so how's that working out? Well, what can I say except that I'm doing my best and turning a blind eye on the messy bedrooms, the skiving off of household chores, the utter lack of music practice and the endless bickering in the car. Thankfully they're almost over except for two on Monday that I'm told will  be 'wee buns'...which only makes me nervous. 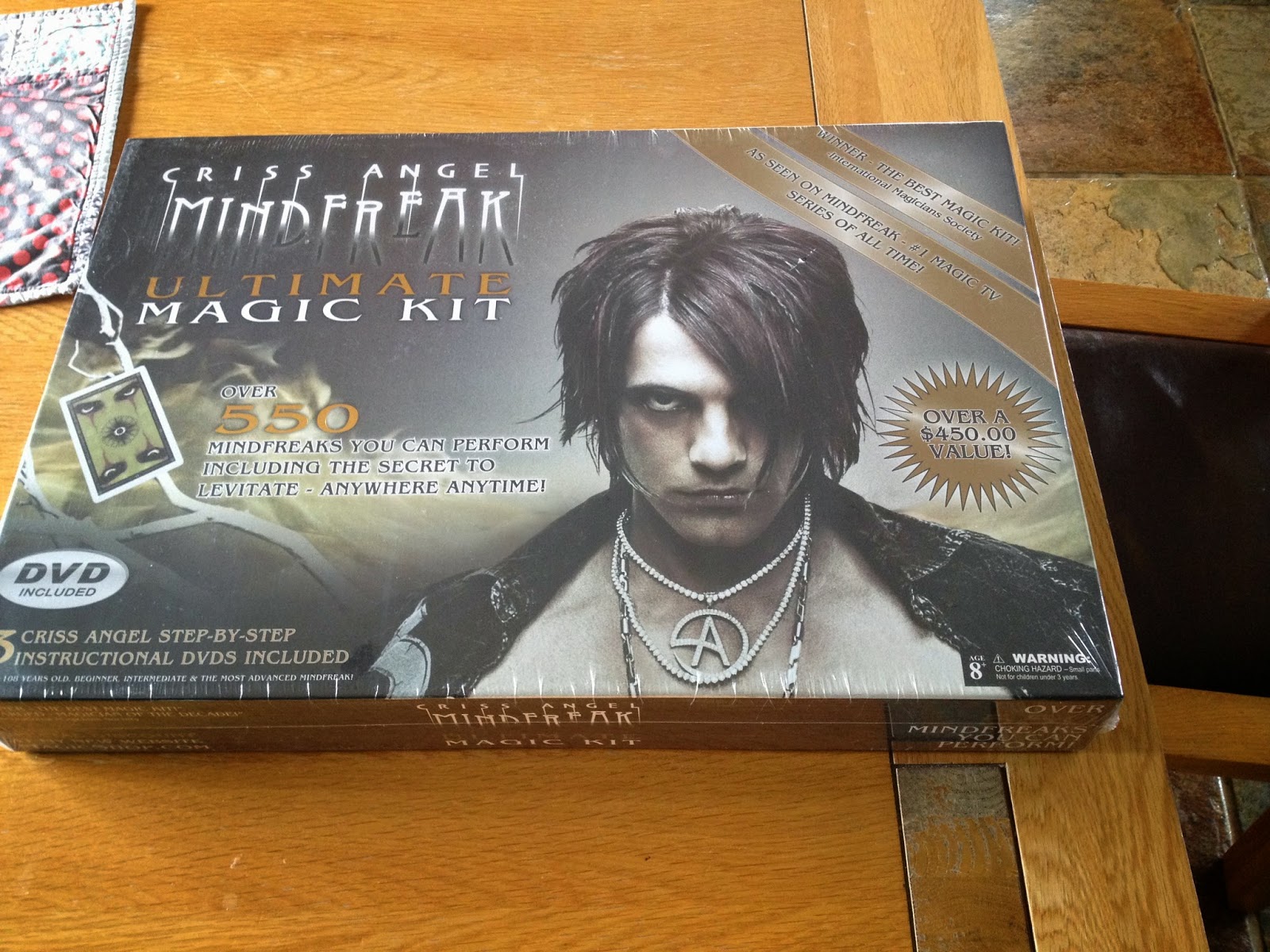 2. Jude's long awaited birthday present arrived bang in the middle of exam week and I didn't have the heart to hide it from him till they were over. Let's just say that his revision immediately took a back seat to Criss Angel!

He's mad about magic, especially card tricks and if you come to our house you will undoubtably be cornered and asked if you want to see a magic trick or ten.

3. I'm flying solo this week as Himself is off for a work trip to the USA and as always when he's gone, I find myself marveling at how single mummies(and daddies) do it, day in, day out, because it is HARD parenting alone. And he's just away for a few weeks which I know isnt the same thing AT ALL, but it always gives me a taste for how much tougher it is emotionally when there's no one there to run stuff by, or to vent to, or just to be reassured that you're making the right decision about someone or something, even if it makes you unpopular in the 'hood.

It also makes me more appreciative of the numerous practical things he does for all of us every day -all those little kindnesses that I'm ashamed to say I usually take for granted. The night time cup of tea, filling up the cars, taking the dog out for last walkies, locking up, magically fixing the sky remote, the morning school runs, carrying in the groceries from the car.. Turns out the old cliche is true after all-absence really DOES make the heart grow fonder!

4.Speaking of travel-Oh I do love a seamless link- and I'm going to savour this because I may never get the chance to utter these words again.... in a few short days *jumps up and down* I'LL BE IN VEGAS BABY! ............No, you shut up!

Short story-Himself is there working ( translation- free accommodation ) AND I've never been there before AND there's Britney and Celine and Elton and Donny and Marie and Cirque de Soleil and shopping and more shopping  and yes, it's true, I'm pretty excited. (Turns out Criss Angel is there too...Jude is GUTTED.)

If I'm totally honest, a really kitsch loving, tacky part of me even wants to put on a veil and renew our wedding vows in front of Elvis in The Little White Wedding Chapel.
Yes, I AM serious actually, and yes, I 'm also aware that it's probably my mid life crisis talking, but I could care less!

5. Of course, the inevitable downside to all this fabulousness is that the closer I am to getting on a plane, the bigger the knot in my stomach gets about leaving the kids....I mean, I KNOW they'll be fine-they're between my parents' house (their second home as my Mum reminds them) and their Uncle, Auntie and cousins so they're really excited.

And I absolutely feel so very grateful and blessed to have family who would do this for us. So why am I worried? I don't know-why is the grass green? Why does the world turn? Maybe guilt and worry is just part of being a parent? Because I think that no matter where I go, part of me will always be with the children, even when I know that they're grand, and probably even when they're no longer children. It brings to mind something Elizabeth Stone said about having kids.
'It is to decide forever to have your heart go walking around outside your body.'
And personally, I think she nailed it.

6. But in the meantime there's no time for naval gazing because there's lists to write and bags to pack and schedules to sort, so I'm trying not to dwell ... and alcohol on the plane will definitely help...and it's a great comfort to know that my nails are Vegas ready even if I'm not.