Is It Just Me?

Do you ever get times when you just can't see the wood for the trees?
When life seems so busy, a bit like those roundabouts when you were a kid, and suddenly it was going too fast, and you were feeling a bit panicky and dizzy but you didn't know how to make it slow down, and besides, everyone else didn't seem to notice, and you didn't want to make a fuss or have them laugh at you?
Or was that was just me? 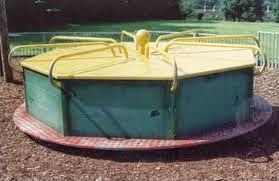 Well, for all sorts of reasons, I'm feeling a bit like that right now. Most of the time, I think that I manage to juggle it all...not necessarily with aplomb, you understand, but I usually keep all the the balls in the air...just about. (Roundabouts, now juggling- it's all about the metaphors today!)

Family life can get overwhelming at times- trying to meet everyone's needs, physical, practical and emotional is hard, and some days no matter what I do, I seem to get it wrong. I lose my temper while doing the homeworks. I only half listen to a meandering story from a child about school. I let the youngest watch TV for way too long. I ignore the fact that there is no way any child has had five servings of fruit and vegetables today, never mind seven but stick on a pizza anyway.

Lists run endlessly through my head of all the things that need done today, tomorrow , yesterday, and instead of staying in that moment or enjoying a joke, I'm already skipping ahead to making lunches, putting on a wash or planning tomorrow's dinner.

And that just the mummy stuff. The other reel playing at the same time is the blog/ writing thing, which I try to squeeze in before 1130am when nursery finishes, between unpacking the dishwasher, and putting on a wash. Never mind if there's a phonecall, an unexpected visitor, or an orthodontic appointment because then I get nothing done at all. And yet, whether I do or i don't, why does it matter to me? Would anyone even notice if I didn't post anything for a month or a year? And even if they did, would they care? (I'm definitely getting a distinct whiff of self pity right now, but I'm actually trying to be pragmatic!)

I look at my blog and it's grown and mushroomed, but not like others out there who have a niche, a USP, a marketable angle, a purpose. I'm crap at promotion and social media. The truth is that I SHOULD be sending out press releases about the MADS, tweeting about it, hooking up with other blogs , embracing Instagram, and Pinterest and Google + because apparently the most successful bloggers spend as much time promoting their blog as they do writing it. Whatevs.

But that's just not me. It's not why I started it, it's not why I write it, it's not what I enjoy. So why don't I just accept that and move on? Why do I tell myself that my reasons for blogging aren't good enough? That I'm not good enough. That it doesn't make any money so why bother. People write blogs for all kinds of reasons, but everyone likes to see their blog statistics and followers grow because we all want to be popular, don't we?

And yet to not care can be wonderfully liberating and there's a freedom in writing just for the sake of it, without censure or feeling the need to impress, or to be the best. Still,  for it to work at all, a blog needs to be up to date-some people post every single day, while I just about manage a few times a week, and, let's face it, you're only as good as your last post

I've also been trying to develop my writing into fiction over the last few months, which really means trying to make it to class, usually without my homework done, occasionally producing something pretty crap and always feeling out of my depth. The blog and the class- doing both but neither particularly well- I'm truly the Queen of Mediocre.

Part of the problem, and maybe you recognize this too, is that I try to squeeze too much in. Every pocket of time must be filled and utilized efficiently. That lull before the school run? Perfect for cleaning the bathroom, folding clothes or editing a blog post. Watching TV after the kids are in bed? I'll be doing a Tesco shop, answering emails, or tinkering with my blog. Driving anywhere? I'll be making appointments, answering phonecalls or just running through lists in my head. Its endless and exhausting and it leaves no time for just being still. I sometimes think that I might have forgotten how.

When did this happen? When I was younger I read endlessly, every chance I got, tearing my way through book after book. When did I put down the book and pick up the iPad ? Yes, it's true that much of the lack of time is down to where I'm at right now -the responsibilities, concerns and practicalities of running a a busy household are indisputable, but many are also habits I've formed, lists I've made, criteria I've set over time in my own head.

And you know what? I don't know that anything I do will ever be good enough for that task master in there. I always end up failing anyway. Yeah, you may have written something worth reading, but sure you haven't made a home cooked meal all week or tackled that ironing pile. Or, so you made two shepherd pies and cleared out three wardrobes but hey, you haven't written a word or phoned a friend or said a prayer.

So what's the point of trying to do it all? Maybe its time to set some of this shit down? To take a step back, and then just go sit outside in the sun. To wake up and smell the coffee, but then to sip over it slowly instead of gulping it back.

So there you go-I've bared my soul to you this Monday morning. And honestly, just doing that much has helped, even though it makes no difference really because I still don't know what to do. But maybe that's enough for now...and thanks for listening.
Later, lovelies xx