1. Over the last six weeks, I have sold my entire wardrobe on ebay and now I haven't a stitch to wear. Ahem. Okay, that may be a slight exaggeration- as Himself observed helpfully last night it still looks pretty well stocked to him, and then my sister cheerily pointed out that the fact I had so much to sell in the first place, said a lot more about my shopaholic tendencies, than my business acumen. 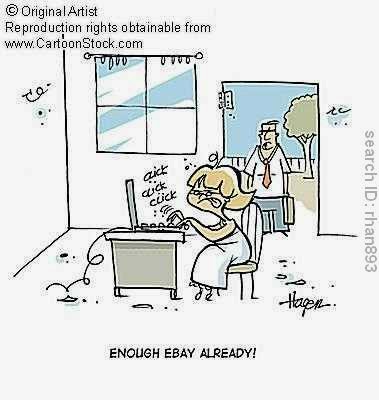 Myself and the lady in the post office are now besties- she'll refer to my numerous grey packages and make comments like  'Just the usual then for all of them?' and ' Your husband must be delighted with you!' and 'Now, who would even think of buying tights on ebay!?'

But thankfully for me,  some people do, which is just as well given the fact that so far, I've excavated fifteen unopened pairs from my drawer. A lovely selection too- tights and stockings of all different colours and deniers and yep, they were snapped up in no time.

But why on earth did I buy them all in the first place? Especially when I only wear skirts once or twice a year. Well, I think my logic was that I really should wear more skirts, and if I had the perfect tights, I would wear more skirts, and then they just sneaked in one by one over a few years until one day I opened the drawer and thought 'My God! Those tights are actually breeding in there.' (Frozen chickens and now tights- is this what a midlife crisis looks like?)

Conclusion- After extensive statistical analysis clearly showed no positive correlation between the number of tights in my drawer, and the frequency of skirt wearing, the tights' days were numbered. Photos were taken, descriptions written and they were uploaded to my ebay in no time at all...... and the skirts followed fairly sharpish.

2. Mother's Day this weekend, which has meant horrid time consuming Mothers' Day homeworks all week.  It. Is. Like. Pulling. Teeth.
Rory, after a huge amount of thought and deliberation counted 'folding clothes' as one of my talents. Well, I was deeply touched obvs.
He also felt it important to include the fact that I had 'lots and lots of shoes.' Great, Imelda Markos with OCD tendencies. But the question is, is that better or worse than the previous classic of  'My Mummy has ginger eyebrows.The end.'

Conclusion-there is no positive correlation between Mothers' Day Homeworks and maternal self esteem. In fact, emperical evidence suggests that there may actually be a negative correlation instead.

3. I'm off this weekend with the girls*  for an overnight to Dublin....as in, a hotel + gossip+ no children + lots of  Prosecco + a lie in. Hell, I'm even looking forward to the hangover. But is it a teensy bit wrong that a night away from your kids is like the best Mother's Day present EVER? Don't answer that.

* All the 'girls' are in their thirties (or maybe very early forties...even if they totally don't look it) and are all married with children, so strictly speaking, are no longer girls. However, the mothership still enjoys early bird suppers  meals out with her loyal band of ' girls' and those chicks are all kicking the arse off seventy, so I'm running with it.

PS. I'm still officially on a high at being a finalist again in the MAD Blog Awards. Will you take a minute and give me your vote in the Family Life and Most Entertaining categories? I know it's a torture, but it's dead quick and it could mean an actual prize come September....rumour has it that it may even be a year's supply of Caramel Squares, so I'm highly motivated.xxxx