1. So, we opened up the caravilla for the season last weekend. Every time I say that, I picture myself  throwing open french windows and pulling dustsheets off the furniture, but what it actually means is that I scrubbed mould off the kitchen floor and turned on the fridge. It was lovely to be back up there though. There's something so visceral and special about being by the sea, even if it is the North Atlantic in March.

For the first time, it was just the two of us as well which was a VERY different experience. The caravilla felt vast, and very serene, and we only needed one small bag of vittles, and lots of wine obvs, and we watched three whole movies. Three! That's more than I've watched this year! They were Before Sunrise, Before Sunset and Before Midnight, starring Ethan Hawke, and were filmed over the course of twenty years.

And the verdict? Well, let's just say that one of us enjoyed them a good bit more than the other.....  I suppose that strictly speaking, they are chick flicks, insofar as there's lots of talking and no end of the world scenarios, but I'm pretty sure he enjoyed it more than he let on, and anyway our other DVD options were Alvin and the Chipmunks and Peppa Pig, so it was a win win all round.

2. It was Himself's forty second birthday yesterday, so he was treated to a chinese takeaway for dinner and an M&S caterpillar cake with a 4 and 3 on top. (I didn't have a 2 but strangely, the bonus year didn't bother him unduly....or maybe he didnt notice?) I gave him a very dapper pair of brogues, which I'm not sure he appreciated given his 'clothes don't count as presents' mentality, but I will, and anyway, I'm sure he'll treat himself to something suitably nerdy on the side to make up for it. Power Drill anyone?

3. Weird moment of the week- I discovered a recipe on the back of a  matchbox. I mean seriously? Who thinks, I'll make a dessert for Sunday lunch. Now, let me just check my matchbox to see if they've anything nice....MMMM apple crumble, lovely! Are there really people out there who would cut that recipe out and file it away somewhere with the rest of their matchbox range? 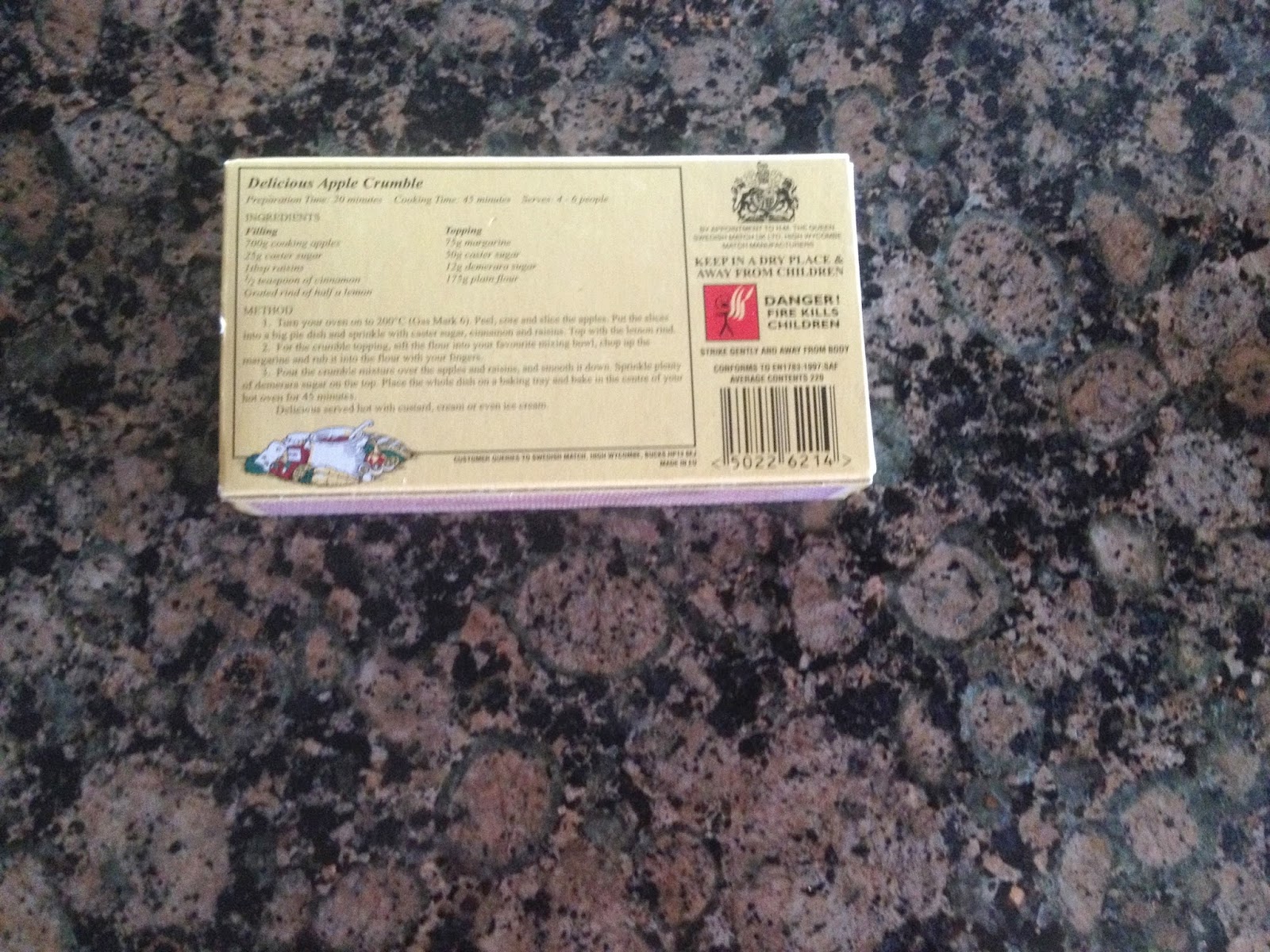 And if so, do they wait three years till all 500 matches have been used up, or risk snipping it out there and then, and just stick a bit of cling film over the gaping hole in the back?
And these recipes-are they just winter themed desserts or is there more of a varied seasonal selection available?
Are some recipes more popular than others? For instance, are there shop assistants somewhere tortured with questions like 'Any chance you've got the one with the pineapple upside down cake on? I really fancy trying that!'
Have you ever tried a recipe off the back of a match box? And if you have, am I missing something or do you think you might be a sandwich short of a picnic?

4. Speaking of which, I think I may have a bit of a thing for frozen chickens, because at last count there were EIGHT in my freezer. That's not normal,surely? There's a decent and  varied selection in there too-honey glazed, pre cooked, herb and stuffing, small, medium, large sizes...I got 'em all. It would seem that without my noticing  my freezer has morphed into final resting place for chickens....and no,  I'm not even quite sure why I shared that actually.

5. Boogie in the Car Seat this week is a Beautiful South song that I hadnt heard for ages, until the other day and it brought back a few memories! Frankly, I think I may have even that Phd in 'I told you so' -Yikes! Oh and in case you're interested, there's a ruder version of the song out there as well, but I thought I'd keep it clean around here for once. Enjoy and Happy Friday lovelies. xx