1. A word to the wise all you lovers out there-admitting that you're not into Valentine's Day, is like handing your loved one a 'Get out of Jail Free' card with no expiry date.

'Don't even think of buying me those red roses or that heart shaped box of chocolates!' I once announced imperiously many years back,  'So unoriginal. So obvious.  And completely overpriced!'

He blinked once slowly, scarcely believing  his luck, and then as comprehension dawned, an expression of unsurpassed, delighted relief unfurled itself across his face, and too late, I realised that I'd sealed my Valentine's fate for ever after. In horror, I read his thoughts as easily as if they'd just crystallised in cartoon bubbles above his head. Snatches of words like 'Loud and clear!' 'Off the hook'.'Sweet to the Beat' and I watched as right in front of my eyes, he contentedly ticked that box in his head and moved on with his life.

I acted swiftly then, rushing in with 'Hold it right there, Sunshine! That was only Part 1 and here comes the T&C's!' But Sweet Lord, there was that  familiar, ever so slightly vacant, nodding dog impression, with the occasional 'Mmmm, Hmmm', chucked in for good measure and I knew that at this point he was merely humouring me.

I was certain then that my 'Choose another day, any day and buy me twice as many flowers for the same price!' Or 'Whisk me off somewhere gorgeous when I'm least expecting it instead!', had fallen on deaf ears and bugger, I'd only just gone and shot myself in the foot. Just like that, my careless declaration that I wasn't not into Valentines Day had, in his mind, just smoothly translated into
'I'm not into outward and materialistic declarations of love on Valentine's Day....or ever. So don't bother yourself with buying me flowers, chocolates or underwear. You, Oh handsome one, are enough'

2. And yet, Valentines still occupies a special place in my heart, because it was twenty four years ago today, that I sent himself a card signed from
'A secret admirer!!!!!!!!!!!!!!!!!!! xxxxxxxxxxxxxxxxoooooooooooo'
I know, not even remotely cliched.  And actually, not so secret either, as we'd already had a cheeky snog and there was a whole lotta phone flirting going on, but it prompted a mix tape and a proper date a few days later, so it worked.
We were eighteen and yes, I DO still remember him in his school uniform, all dark curls, skinny and still tanned from a French holiday the summer before. He had just this little patch of stubble on his chin which I recall impressed me no end. And after carefully applying  my Body Shop kiwi lip balm and liberally dousing myself in White Musk, we met after school, held hands and went to Leisure
World where he bought me a Garfield clutching a satin red heart, and as easy as that, I handed over
mine.

3. There were a few early speed wobbles of course- like that time  I finished with him in a fit of mortified fury for arriving into the hairdressers unannounced while I was getting my perm in.
'You're dropped!'  I screeched dramatically at him, when he wouldn't leave AT ONCE.
Laughable really how I couldn't bear the thought of him seeing me in a shower cap and cotton wool draped round my head, and yet was quite happy to rock that ginger frizz all round the town. We didn't know it then but there were a good few bad hairstyles to come and so much more growing up still to do.

4. What I do know now, and what I didn't know then, is that Valentine's Day is only one day in a whole year, and that romance isn't flowers and chocolates and underwear. (Although can I just state right now, in case any relevant person happens to be reading this, that I'm as partial to those as the next girl).

What I'm saying is that, it really doesn't mean that he loves me if he buys them on Valentine's Day, and it really doesn't mean that he doesn't, if he doesnt. And no, that's not letting him off the hook, it's just preferring a little spontaneity, and maybe feeling the love on another day that's meaningful for the two of us.
And yes, of course romance matters, but it doesn't look like a furry Garfield or a mix tape anymore- now it looks like a million tiny things that all add up and tell me that I'm loved every single day.
That nightly cup of tea, turning on my electric blanket, buying a heater for under my writing desk (heat is a big theme here!), running the bath and then leaping in too, bringing the bins out, putting diesel in the car, carrying in the shopping bags, getting up in the night with a sick child, laughing together at something the kids said, giving me time (such a luxury) to be alone, .....So many that I can't list them all, and even if I did, they wouldn't sound like much, but they add up to a big slice of romance to me. To use a metaphor, flowers and chocolates and undies are the icing on the cake, but they're not the cake itself. And I'll prefer the big slice of cake to the icing any day....(Unless we're talking diamonds, then all bets are off!) 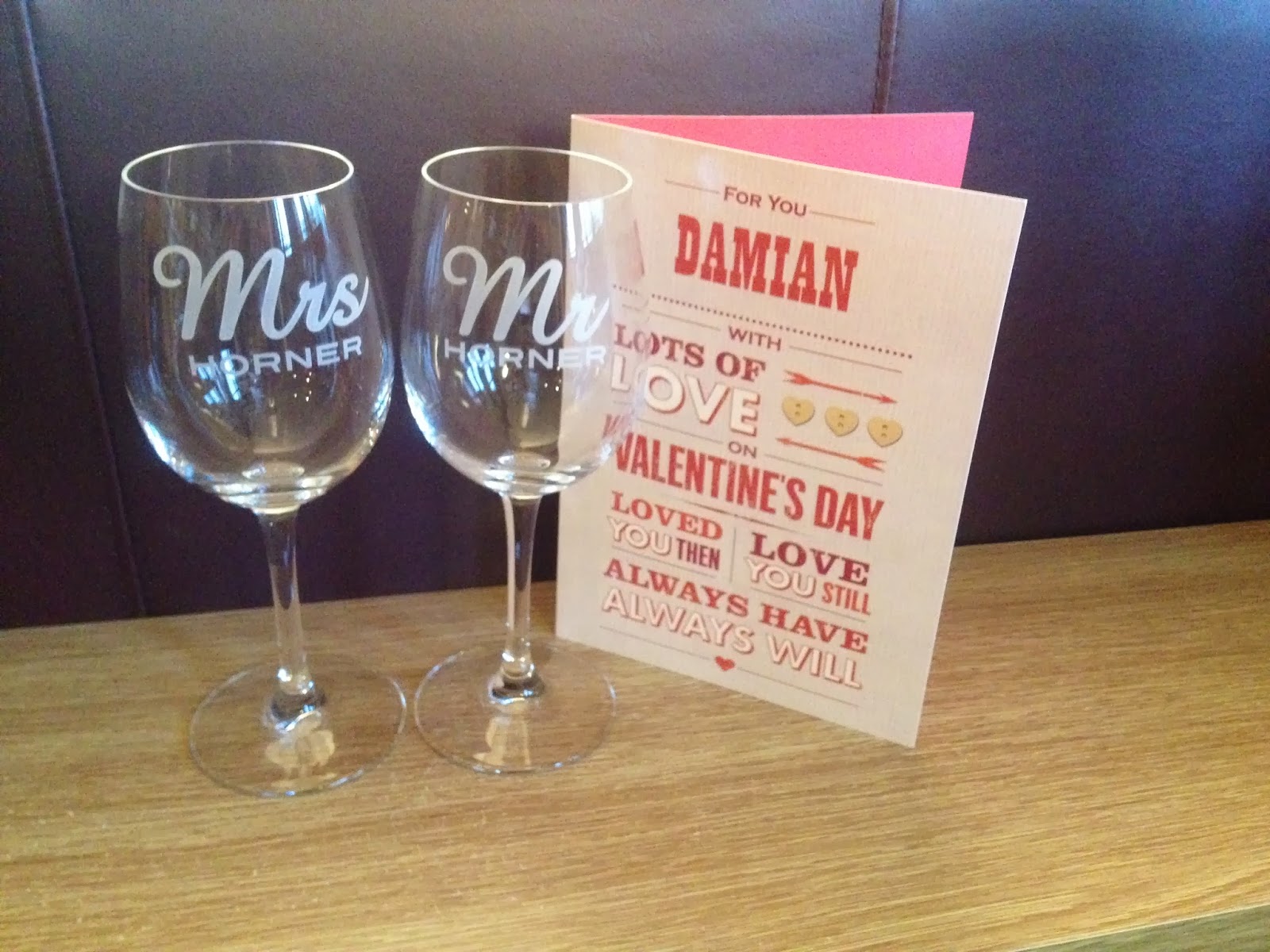 5. So what did I get him? Well, apart from the M&S 'Dine In for two', I got us both a little something for a liquid refreshment later. Practical, I felt, but personal and a little bit romantic too.

6. Finally, Boogie in the Car seat has to be this one by Tom ODell, cos I love it, and it will always
remind me of Himself. Enjoy!