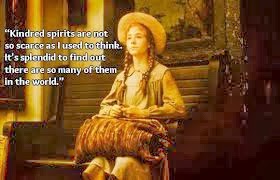 Just the other day I met a kindred spirit. A lovely lady, with skin so fresh that when she told me that she was sixty nine I could hardly believe it.

A lady with the warmest smile and the kindest eyes, she began a conversation as we sat side by side at a counter having a cup of coffee.

A conversation that began quite naturally when she leaned over and enquired about the book that I'd just taken from my bag - 'The Happiness Project' by Gretchen Rubin.

I'm halfway through and really enjoying it, so  I told her about it and she listened and nodded, and then I realised I was prattling on a bit, so I got all shy and a bit tongue tied. But then she took out her pen and carefully wrote down the title and author -she said it sounded like the perfect gift for someone she knew. Thoughtful, you see.

We talked on then about other things and I knew she was a kindred spirit, because we got straight to the core of things, without any of the layers of BS and self consciousness that often accompanies a  new encounter.

She told me about her chronic medical condition, with the good days and the bad, and the faith that helped her through it. And she wrote down her doctor's name so that I could pass it on to a friend with a similar condition.

She said that she's always thought that if she can help others out along the way, then her own life will have been worthwhile....and often all it takes is a word and a smile.

She explained that when she was younger, she'd taken on other people's pain and problems as her own, but as she'd got older she'd learned to balance her sensitivity with the need to protect herself... but it had taken a long time to learn.

As we parted, she touched my arm and with a smile as warm as the sun, she thanked me for our chat. So of course, I told her that it had been lovely to meet her....because how could I put into words that what I actually felt, was enriched by her wisdom, and understood on some deeper level that I didn't quite understand.... and that maybe we might be kindred spirits.

But no, I didn't say that, because it would have sounded weird and more than a bit psycho stalkerish, especially if she hadn't read Anne of Green Gables....but strangely enough, I think she knew anyway. I hope I meet her again some day.