1. Truth be told, I've had better Valentines' Days. We had rented a house for a few days (en famille, not a deux), so the morning was spent packing toilet rolls, stew and hot water bottles-(What can I say, it seemed like a good idea at the time?)-and it pretty much went downhill from there.

The torrential rain should have been a sign to stay put, a nauseous child even more so. But despite reservations (mine) off we went, complete with trusty 'boke bowl' on the green -looking kid's lap just in case. (Which rather worryingly emerged, not from its designated spot under the utility room's sink, but from the baking cupboard in the kitchen.... but moving swiftly on.)

I'll not bore you with details of the journey, suffice to say, it included a car malfunction, a boke bowl that was pressed into service three times in total, and several all time lows involving the disposal of  bowls of vomit into hedges in torrential rain. (It would certainly be true to say that more than once on that journey, I recalled, with some nostalgia, a very different Valentine's Day in New York three years ago.)

And the fun didn't stop there. On arrival, a freezing house awaited us - it was so bloody cold that I actually wore my hat, socks and cardigan in bed - and our poor vomiting child had such an awful
night that she ended up in A&E with an IV drip early the next morning. Truly the very best that can be said about the whole sorry heart shaped day - and I think I speak for all seven of us here - is that blessedly it's over. 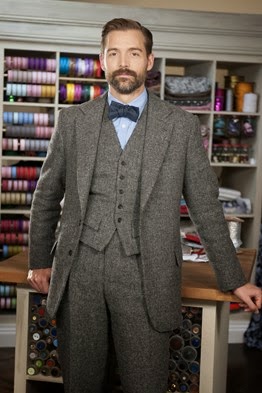 2. We jumped right into the 'Great British Sewing Bee' this week, and that rather dashing judge Patrick Watson, (even though I suspect may be a friend of Dorothy), is the icing on the cake....or perhaps more aptly, the
embroidery on the napkin.

Maybe if my H.E. teacher had looked like him, I'd be running up curtains and making my family's clothes now, instead of just sewing on the odd swimming badge and clearing out the Boden sale.
But just as during first series, despite our utter lack of practical experience, Himself and myself have morphed into experts overnight.

'Oh no, call that an invisible hem? I heard myself say,
'he'll be out for that!' And then later would you look at the state of that seam-She's clearly out of her depth!'
came the scathing voice in bed beside me.
Tres enjoyable, I must say... it would almost encourage me to ask for a sewing machine for my next birthday....Nah, not really.


3. Here's a gender/medical question for all you experts out there - why do boys fart so much and why do they find it endlessly hilarious?  In the car, at the table, in the bath, on each other's beds ...I am, like soooo over it ten years ago, and yet around here it's a joke that never gets old, and the gift that keeps on giving.

And will they grow out of it? Ever? An experienced mama once told me that I'd know when they'd  discovered girls because they'd start to smell themselves. Now, I think she actually meant their armpits, but you'd think it might apply to flatulence too, wouldn't you?


Although from what I recall of my own three brothers, I'm pretty sure that any restraint exercised didn't extend to the home setting AT ALL, so Unfortunately,  I suspect that I may just have to
suck it up, so to speak, as one of the many crosses joys of living in a male dominated household.

4. Rory's homework over midterm has been to learn to tie his laces - I think his teacher is completely fed up having to tie them for him after PE - and let's just say that it's been a struggle. This is one of the few downsides of  Velcro closing shoes, which incidentally they never had in our day, so we all learned to tie at about eighteen months old. And even though it was an unpopular decision, I felt the only way round it was to force the issue, and buy them lace up school shoes.

The truth is, I'd noticed that the two of them were actually avoiding wearing their (expensive!) laced up Converse and DMs,  in favour of their (cheap) Velcro strap Tesco runners, and suddenly I had visions of them heading off to uni in their size 10 white Velcro gutties.....hence the drastic measures.  Success has still eluded Rory in particular, despite a sticker chart in operation, but we're getting there...no point getting tied up in knots over it. (Sorry - couldn't resist.)