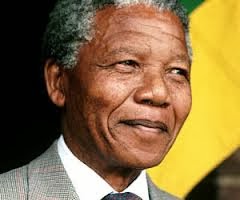 1. In the car yesterday, Anna was telling us about a joint English/ History project for school, in which she has to pick a person- anyone at all, dead or alive, famous or not, and make a persuasive argument for how they displayed courage and influence. She wasn't sure who to choose and we chatted briefly about courage and examples of it. Then later, we heard the news that Nelson Mandela had died and suddenly her choice seemed obvious, for who more worthy than he? RIP Mr Mandela.


2. We're putting up our Christmas decorations tonight and, would you believe, I'm in the doghouse already? Pour quoi? Because this year I committed the grievous sin of quietly ordering an artificial tree. I mean, honestly! You'd have thought I'd told them Christmas was cancelled and Santa wasn't coming by the looks on their faces.
'What's that? What? A fake tree? Noooooo! Is it tiny? I bet you it's titchy! We only love big trees!'  Eh,Yeah I know.  Last year's Griswald-esque one was only flippin'18 feet tall but I'm the only one who remembers the stupendous needle drop.
So then I tried explaining that it was no ordinary fake tree - it was a snow tipped Laurence Llewellyn Bowen inspired tree-luxuriant and a bit camp, rather like Mr LLB himself, now I think of it- but they weren't remotely impressed. There could well be a stand off later but I'll keep you posted.


3. Update- I went to my class yesterday, got back my assignment and was really pleased with my
mark and the tutor's encouraging words. It's definitely inspired me to keep writing.
Now part of me was still busy thinking- 'Behave yourself! It's just a short story. It doesn't make you flippin' Marian Keyes so get a grip.' But the other part just wanted to run home with it and tell my Mammy.....So that's just what I did. And in true Mammy style she put me over exactly what the tutor said five or six times, and then wrote it down word for word to tell her friends/ family/ dogs on the street later. I suppose some things never change and I'm very glad they don't.


4. Always on the look out for purveyors of fine tray bakes and unlimited coffee refills, three-year-old Luke and I arranged to meet Herself (Mammy/Nana) in a place we'd never frequented before. We walked in and Luke was assessing it all- the Christmas decorations, the smells, the impressive selection of goodies- and then he turned to me, nodded approvingly and said, 'Good choice, Mummy.'  (That's ma boy!)

5. Finally, when we lived in the US, I listened to a radio station rather embarrassingly called  WASH-FM - Soft Rock, and for a whole month, from the day after Thanksgiving, until Christmas Day they would play only Christmas songs 24/7 -Well, I LOVED it! It totally put me in the Christmas mood and I got to hear every Christmas song under the sun- who knew there were so many Country ones? Anyway, the first time I heard this one, I could hardly drive the car I was crying so much...in my defense, I think I was pregnant at the time. So here it is, a big slice of Christmas cheese maybe.....but still guaranteed to bring a wee tear to my eye every single time.
Enjoy and have  a good weekend , my Lovelies xxxxx