1. Friday again and what a week it's been! Best of all, I have a new nephew- Baby Liam James Mc Loughlin arrived safely early in the week in California, the fourth child and third son of my brother James and his lovely wife Jaci. That makes a grand total of 17 grandchildren (12 boys and 5 girls) for the 'rents! (Go testosterone!) We won't get to meet him for few months, but its one of those (many!) occasions where I'm grateful for the Internet and Facebook- we see the pics and hear the bizz right away!
I remember when Anna was born in America in 1999, and a techy Loverboy posted her first pictures (pre Facebook) for our amazed  family back home. ('You mean you just took these, and now we can see them all the way over here?') Now Anna's nearly fourteen and beyond thrilled because her Uncle James asked her to be baby Liam's godmother. There's something distinctly full circle about that which makes me feel very proud, and ever so slightly old, all at once. 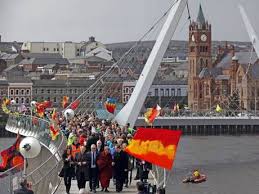 2. The Dalai Lama was in Derry yesterday! It sounds like the opening line of a joke but no, the actual real life Dalai Lama was in the Maiden City and walked across the new Peace Bridge, with Catholic and Protestant school children- pretty awe inspiring when you think about it. Looking at the photos, I'm sure he must've found it a bit breezy on the bridge in those beautiful flowing robes- let's face it, weather wise Derry's no India-  but he seemed to manage just fine. Which is just as well, because even he were foundered, he can hardly throw on a Northface gilet  and a pom pom hat.

3. Slipping it in, totally casually at number 3, is the news that we've taken our house off the market. I think I finally realized how much we've got here, and that actually having Starbucks within walking distance isn't such a dealbreaker!
I took another look at the children and saw how happy and settled they are and questioned why I'd rock the boat. I looked around at my great friends and knew that no matter where we lived, I'd never get that lucky again.  I honestly think it took me to put leaving plans in place, before I realized how much part of the community we've become, almost without noticing, and how sad I'd be to leave it behind. Maybe someday things will change again, but for now we're staying put. I think I feel a party coming on!

4. It was B's birthday this week and myself and the Glenavy girlies (as previously mentioned!) had a little midweek wine and cake celebration for her. Anyway, we got to discussing kids singing along to tote inapprope song lyrics, and we were citing Rhianna and Katy Perry, to name a few. I suppose there's an assumption that this is a fairly recent phenomenon, but suddenly I remembered a time waaaaay back in 1982 when I was about 6, (okay, 11), and we were on a family day out, all packed like sardines into our old Volvo Estate- Granny, Granda, Mummy, Daddy and 5 kids. Well, there was a bit of a singsong going on (I don't think the Volvo had a radio) and it was my turn and off I went with  Charlene's 'Never Been to Me' -all three verses of it- I even did the heartfelt talky bit in the middle, hand on heart, eyes closed.  I couldn't understand why afterwards the adults  had faces like smacked arses and there wasn't even the tiniest round of applause.Awkward!

5. So even though its not a 'Booster seat boogie' as such- more of a slow sway- here it is, lyrics and all,  Charlene's totally OTT  'Never Been to Me'- I'm STILL lovin' it!
Happy Friday my lovelies, Emmax