1. . Anna went to her very first concert this week- she went with her cousin (chaperoned by Loverboy) to see 'The Script', although of course, the only one who mattered was Danny O'Donoghue.
With their  homemade sign and their hair curled specially, the pair of them screamed themselves hoarse. Exactly as it should be.
It brought me right back to my first concert (I'm so NOT counting Chris de Burgh/The Singing Eyebrow)-it was Aha in The Kings Hall in Belfast. We didn't even have tickets but we got right to the front anyway - I even saw the gorgeous Morten Harket combing his hair behind the curtain before it started! My teenage experience was complete when later on I swooned dramatically with the heat and the excitement of it all, and had to be lifted over the  barrier by a burly security guard. I instantly declared it the very best night of my entire life EVER. 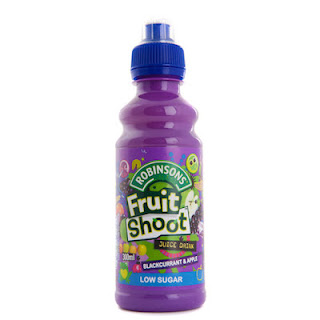 2.  I hit a personal low this week when I encouraged our youngest son to pee in a Fruit Shoot bottle, in the ladies' changing rooms in Primark. But before you click that x button in the right hand corner of this screen, can I at least explain?
Time was of the essence- I'd two hours to do a load of messages, and by this stage, I 'd already spent one of those precious hours in various public toilets, fruitlessly beseeching nature to take its course.
In the process,  I'd managed to piss off an old lady on crutches by tying up the disabled toilet for too long, and then to make matters worse, Luke refused to vacate the aforementioned loo, and threw such a hell raiser of a tantrum that I had to physically carry him out past her, bare bottomed, whips round his ankles, while she looked on stoney faced. Understandably enough I suppose, she proceeded to ignore my distracted apology, while I wanted to burst into tears as I  forced my devil child's rigid body into the buggy and strapped him in.
Off  I rushed then round the shops, and was on the third floor in Primark, with a basketful of stuff, when His Lordship informed me that he absolutely, definitely had to go this time. The wriggling around in his seat, indicated that this wasn't another false alarm, so I'd a choice to make- dump my basket, wait for the lift to take me down three floors, run 200 meters to the nearest loo, only to discover that he'd been caught short anyway or..... grab a top ( 3 sizes too small as it turned out), and calmly head for the ladies' changing rooms with my stashed blackcurrant Fruit Shoot bottle.Well,  I did the latter and it worked like a dream. (Still not a good dream obvs)  So now, I'm just ever so slightly concerned that because he was so thrilled with the entire experience, he may well decide to utilise future Fruit Shoot bottles in this novel way, in even less appropriate and even more public settings.Yikes!

3. Have you seen 'Breaking Bad' by any chance? I'd managed to wrestle the box set off  my sister last week before she sold it on Ebay.  I'd heard that it was completely unmissable so we watched a few episodes and, well, Loverboy loves it, while I ...appreciate it. I mean, I do see that it's really original and why it's won all the awards, but I'm just not feeling the love. It's too gritty for me and too much of a leap from my current period drama favs 'Call the Midwife' and 'Mr Selfridge'.
I'm just not sure that I want to see how to make crystal meth from scratch, or how to dissolve a dead body in acid. I'd much rather see romance blossom between Chummy and her policeman, or watch Mrs Selfridge's 'almost affair' with the artist unfold. Clearly, I'm missing something because I felt the very same way about the highly acclaimed 'The Wire' - I just didn't get what the whole fuss was about, and it didn't help that I couldn't understand Baltimore gangland speak-  Loverboy had to pause it constantly to translate it, so in the end I just gave up and watched 'Mad Men' instead.

4. Remember I told you that I'd keep you posted on the 5:2 programme  I've been doing? Well, yesterday was my first monthly weigh in and I've lost half a stone!!  To be honest,  if you see me you won't even notice, because I'm quite good at camouflaging my 'zones', and I'm certainly no stranger to Spanx, but I can definitely feel it round my middle so I'm delighted with myself. The very best part is that I'm finding it easy- something I NEVER thought I d say about losing weight. I'm really strict on my fast days- I actually enjoy the challenge- and then I eat what I want, without the guilt,  for the other 5 days. Mentally, it just seems to work for me, and I'm delighted that it seems to be chipping away at my muffin top as well.

5. Finally, I heard last night that I'm a finalist for the MAD Blog Awards 2013 and I just can't believe that I've been so lucky again, especially when there are lots of better blogs who didn't get through.  There are days when I  ask why  I'm writing about my little life and  wonder who in under God would want to read about it anyway, and I've seriously considered pulling the plug on the whole thing. Then something like this happens and I feel a teeny bit special and very much loved...and it's completely down to you, taking the time to vote even when you've a million better things to do with your time. So I just want to say thank you very very very  much. You. Are. The. Best.

6. If you've made it to the end of these (most definitely not ) Quick Takes, I'll just finish with my Car Seat Boogie. This week it's Debbie Harry's 'I Want That Man'  from 1989. I mean who among us hasn't stood in a pre- formal disco, alcopop aloft, shouting along to 'I wanna be kissed from head to toe, by that man in the very back row'!?  No? Oh. That'd be just me then. Happy Friday my lovelies.xx