If there's one food group that I'm VERY partial to, it's cake-that's ALL cakes.....except fruit cake- I can take or leave that. It's funny because biscuits and chocolate can stay in the cupboard for weeks and I can be relatively restrained-the only exception being, as you well know, a good caramel square-but as soon as cake makes an appearance, I'm done for. It calls my name, no one elses, only mine over and over, until every last piece is gone.

So wisely, because I know this about myself, I very rarely buy or make cakes, and if I do I force feed them IMMEDIATELY to the children, and any visitors or delivery men who happen to call, just so that it won't be crying for Mama come supper time. I'll be honest with you though, birthdays are tough, and we have not one, but two here in January. And really, is there ANYTHING nicer on a cold, wintery night than a bit of Gok, a cup of tea and a wedge of M&S Madeira with balloon icing and jam and cream in the middle? I think not. Except possibly a generous piece of M&S chocolate caterpillar cake, preferably the face part, but at the very least one or two chocolate feet thrown in for good measure? (Yes, I DO favour M&S as it happens- it's THE best-just trust me on this, cos I've tried 'em all!)

An added complication of the January double birthday whammy is, as usually occurs, the boys' actual birthdays fall midweek, while their parties are scheduled for the weekend. You see where I'm going with this? That means not two but FOUR cakes, and I'm feeling quite faint right now just thinking about it. I've tried to think of ways around it- perhaps buying a boring old cherry cake, or a Christmas cake on sale, just to do our 'family' parties, and that way I'm not tempted to have even the smallest piece. But seriously, can you imagine? I'd be run out of the house before I got to the 'For he's a jolly good fellow!' part if I tried to fob them off with that..and rightly so!

This year for Rory's birthday, I decided to make a cake for the family gig and he requested a 'jam' cake, (my old nemesis the Victoria sponge), so I dusted off my Kenwood and got cracking. Actually, I used to do a fair bit of baking, but now I blog instead....and it shows. There was a teensy bit of a hiccup, as you can see, when the whole top of one half refused to come out of the cake tin. (In these circumstances, I automatically blame the Aga, but truthfully, I should have just greased the cake tin properly.) 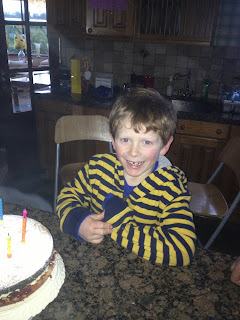 It's wonderful though, how a buttercream filling, ( NOT margerine-cream), good quality raspberry jam, and a bit of icing sugar over the top, can pull a would be baking disaster back from the brink, and the end result was deemed a resounding success.... and not just by me! So good in fact, that Cormac specifically requested it for HIS family birthday party the following week, which has sadly been and gone, but I've PROMISED to do it this weekend instead. Hmmmmm, and that would be the weekend before Lent begins.....which is surely cake free....so stick the kettle on- I don't mind if I do!