Hanging on the Telephone 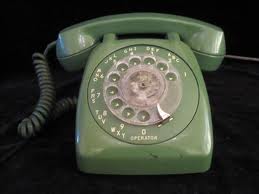 Phones certainly aren't what they used to be. I'm old enough to remember the rotary dial ones that are now  'retro'- we had one LONG after other people had moved on to the 'oh so modern' touch tone phones. Ours was a horrid olive green colour and was attached to the wall in our cloakroom. Unfortunately, this was also directly adjacent to the downstairs loo, so with three brothers I'm sure that you can only imagine the woeful lack of privacy combined with the inevitable toilet noises that accompanied most calls- timing really was everything.

With the rotary dial phone, there was no quick punching in the numbers either. Oh no, you had to wait till the dial noisily whirred and clicked it's way back round before putting in the next digit, which of course gave the game away every time. I remember well huddling among the coats whispering about boys with my BFF only to be rumbled by Big Anne -  'I hear you! Get off that phone! You only left her 5 minutes ago so what could you possibly have to talk about?' If only she knew!

Of course you NEVER, ever made a call until after 6pm. In our house that was dicing with death, especially with the dawn of evil itemised phone bills. Major quarterly interrogations took place in its wake and believe you me, Guantanamo Bay had nothing on my Ma.
'Someone was on the phone at 5.45pm to a Belfast number, FIFTEEN minutes before the low rate. Was anyone dying because nothing else could be that important! Who was it? Okay then, I'll just ring the number (after 6pm) if the culprit doesn't come forward.'
Finger moving down the page. ' What!! Dear goodness, there was an INTERNATIONAL call to America costing £32 made in the middle of the night. That has to be a mistake....I mean, who would....?..... JAMES!! JAMES!!! Get down these stairs right now!'

Later, when we did get a touch button phone, my Dad, understandably enough, put a lock on it straightaway. It was a plastic plate like device that covered most of the buttons and a special key was needed to remove it. Terrible it was too, except that by now Loverboy was on the scene, and motivated by a girlfriend who could never actually phone him, he first studied the lock and then promptly customized a table fork which acted as a substitute key, cleanly popping the plate right off. (The fact that it also cut the inside of my bag to shreds was a small price to pay). Unsurprisingly, the brothers were much less subtle- they simply ripped the plate off and clumsily re-glued it each time which ultimately thwarted my 'special' fork. Clumps of Dried glue on the buttons and an inexplicable rise in the phone bill led to the 'rents raising their game yet again and  a proper pay phone was installed.... Ah good times.

Of course, all this fun and games were long before mobile phones were invented....and Facebook, Twitter, Skype, and the rest. But  as teenagers, even then we still did our level best to stay in touch any way we could with our friends. Looking back it was all so very simple-there was one phone in the house and that was it, so the law breaking was contained.  Now our children get their own phone in primary school. Think of it, their own phone! And often it comes with the entire Internet at their fingertips as well! Then, at that very tender age, we expect them to learn and illustrate restraint and maturity, in the face of  huge temptation and a natural inclination to explore and break the rules. Could I have done it? Do I even now? 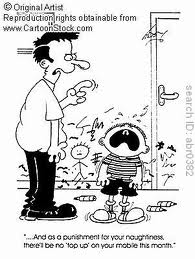 For our oldest two, we opted for fairly basic phones and modest packages and strictly NO WiFi,  in an effort to break them in gently and hopefully teach them to budget and self monitor. So how's that working out?
Put it this way, they're learning...we're learning. It's a work in progress.
Which is why I was delighted when I came across these 18 rules that  Florida mum and blogger Janell Hoffman  laid out for her 13 year old son Greg, who'd just received his first iPhone for Christmas.  I love her wise guidelines and I plan on stealing and implementing most of them as well. Here they are....

12/25/2012
Dear Gregory
Merry Christmas!  You are now the proud owner of an iPhone.  Hot Damn!  You are a good & responsible 13 year old boy and you deserve this gift.  But with the acceptance of this present comes rules and regulations.  Please read through the following contract.  I hope that you understand it is my job to raise you into a well rounded, healthy young man that can function in the world and coexist with technology, not be ruled by it.  Failure to comply with the following list will result in termination of your iPhone ownership.
I love you madly & look forward to sharing several million text messages with you in the days to come.
1. It is my phone.  I bought it.  I pay for it.  I am loaning it to you.  Aren’t I the greatest?
2.  I will always know the password.
3.   If it rings, answer it.  It is a phone.  Say hello, use your manners.  Do not ever ignore a phone call if the screen reads “Mom” or “Dad”.  Not ever.
4.  Hand the phone to one of your parents promptly at 7:30pm every school night & every weekend night at 9:00pm.  It will be shut off for the night and turned on again at 7:30am.  If you would not make a call to someone’s land line, wherein their parents may answer first, then do not call or text.  Listen to those instincts and respect other families like we would like to be respected.
5.  It does not go to school with you.  Have a conversation with the people you text in person.  It’s a life skill.  *Half days, field trips and after school activities will require special consideration.
6.  If it falls into the toilet, smashes on the ground, or vanishes into thin air, you are responsible for the replacement costs or repairs.  Mow a lawn, babysit, stash some birthday money.  It will happen, you should be prepared.
7.  Do not use this technology to lie, fool, or deceive another human being.  Do not involve yourself in conversations that are hurtful to others.  Be a good friend first or stay the hell out of the crossfire.
8.  Do not text, email, or say anything through this device you would not say in person.
9.  Do not text, email, or say anything to someone that you would not say out loud with their parents in the room.  Censor yourself.
10.  No porn.  Search the web for information you would openly share with me.  If you have a question about anything, ask a person – preferably me or your father.
11.  Turn it off, silence it, put it away in public.  Especially in a restaurant, at the movies, or while speaking with another human being.  You are not a rude person; do not allow the iPhone to change that.
12.  Do not send or receive pictures of your private parts or anyone else’s private parts.  Don’t laugh.  Someday you will be tempted to do this despite your high intelligence.  It is risky and could ruin your teenage/college/adult life.  It is always a bad idea.  Cyberspace is vast and more powerful than you.  And it is hard to make anything of this magnitude disappear – including a bad reputation.
13.  Don’t take a zillion pictures and videos.  There is no need to document everything.  Live your experiences.  They will be stored in your memory for eternity.
14.  Leave your phone home sometimes and feel safe and secure in that decision.  It is not alive or an extension of you.  Learn to live without it.  Be bigger and more powerful than FOMO – fear of missing out.
15.  Download music that is new or classic or different than the millions of your peers that listen to the same exact stuff.  Your generation has access to music like never before in history.  Take advantage of that gift.  Expand your horizons.
16.  Play a game with words or puzzles or brain teasers every now and then.
17.  Keep your eyes up.  See the world happening around you.  Stare out a window.  Listen to the birds.  Take a walk.  Talk to a stranger.  Wonder without googling.
18.  You will mess up.  I will take away your phone.  We will sit down and talk about it.  We will start over again.  You & I, we are always learning.  I am on your team.  We are in this together.
It is my hope that you can agree to these terms.  Most of the lessons listed here do not just apply to the iPhone, but to life.  You are growing up in a fast and ever changing world.  It is exciting and enticing. Keep it simple every chance you get.  Trust your powerful mind and giant heart above any machine.  I love you.  I hope you enjoy your awesome new iPhone.  Merry Christmas!
xoxoxo
Mom