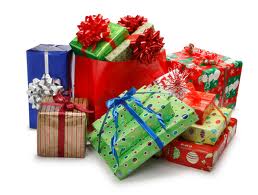 Today I decided to focus on a seasonal conundrum facing many of us at this time of year- the thorny topic of teachers' presents. Over coffee and mince pies yesterday,  a couple of us tried very hard to reach some kind of  agreement on this complicated issue once and for all .....and failed miserably.

Everyone has their own thoughts on the matter. Do you buy a present for your child's teacher at Christmastime,  or at the end of the school year, or both? What about the class room assistants? The school secretary? The principal? And that's just for starters-don't forget  the judo/ piano/ drumming/ tennis teachers too! You get the picture- so where do you start? And stop?

In the primary school, we, (and by 'we', I mean 'me'), do the 'Shoe Box Appeal'.  A month or so before Christmas, we wrap and fill several shoeboxes with  toys and goodies to be sent to children in Africa. The school states very clearly that this is INSTEAD of buying Christmas presents for teachers, and although time consuming, it certainly seems much more relevant than yet another scented candle for Mrs X.

Simple, or so you'd think,  but what ACTUALLY happens is that lots of parents quietly give two fingers to those sensible guidelines, and at the last minute smugly produce beautifully wrapped  presents for everybody and their dogs. Which then of course, sends the rest of us into a right old panic because now WE look suspiciously like tight arses, and let's face it, NO mummy wants to wear THAT particular crown.

So now we're on the horns of a dilemma and it's time to run through our limited options -
a) stick to your guns, brazen it out and overcompensate for your faux pas in June with the handwash AND  the bottle of wine.
b) scavenge around at the last minute, thanking God you had the foresight to stash away those '3 for 2' 'Soap and Glory' sets, or
c) most pitifully of all, with no more gifts to re-gift, you're left to hoke through the last bits of old tat in the local chemist, frantically wrapping them in the car before the final school run.
Personally, I've done all of the above.

But this year, I decided early on to just bite the bullet- do the shoeboxes AND give the presents and that was grand.....until I had a chat about it with a certain friend, (You know who you are!) who historically, is the worst offender when it comes to landing the rest of us with the gift buying guilts. She normally buys for EVERYONE, (including the dinner lady), but  informed me that, no, this year she was doing the shoebox appeal and only getting teachers' summer presents. Eh, hello? As its this very same friend who sparked my panicked  tailspin down the chemist  more than once, the uncharitable part of me is tempted to just let it slip in the dying moments of term,  that I'm actually doing both this year myself...but honestly,  its up to her and I'm sure the teacher won't even NOTICE the lack of present, and DEFINITELY wouldn't hold it against the child anyway. But then the other nicer (meaner?) part of me calculates that if Mrs Claus isn't getting them, then it  probably IS overkill, so I'll just hold onto those lovely Joules hand sets till June and say no more about it. What till do?

I also heard about a MUCH more organized system at a different friend's school. Apparently, all 26 parents give in a tenner, and the lucky teacher pockets £260 large ones to spend in the House of Fraser.  A win win all round, I'd say, BUT then again, someone would need to step up to coordinate and organise it and it's already  beginning to seem like waaaaaaaaaaay too much hassle.

No matter what you or I end up doing though, spare a thought for this teacher's recent less fortunate gift experience. A child in her class brought in a large envelope with a present inside, which she left on the teacher's desk. Later, while the class was busy, the teacher idly picked it up, glanced inside and before she knew it the entire envelope and its contents were vibrating quietly in her hand. Those of a delicate disposition should stop reading now, because yes, you've guessed it -the child had indeed discovered and re-gifted this lucky teacher with her mummy's golden hued bedroom toy. Wrong on so many levels.....and  just imagine the excruciating mortification for all concerned, when it was discreetly returned to its rightful owner later that day....
Kinda puts the whole 'present thing' into some perspective, eh! Catch ya later, Emmaxx
Posted by Emma at 13:27