1. There are certain things that even with the hustle and bustle of last minute deliveries, gift fueled panic, and end of term excitement, grounds me, and makes me really feel Christmas. Right here, inside. One of these was the school carol service that Anna sang in this week. Something happens when I listen to the beautiful Adeste Fideles and I was even able to sing the descant part in the third verse from my own choir days all those years ago!
It certainly wasn't without its trying moments mind you, probably because it was the evening and the wee ones were tired. Rory, for example, opted to prostrate himself on the floor for the entire service, studying the end of the kneeler intently, leaping  up only when he heard the opening strains of 'Away in a Manger'. At that point,  he belted out all three verses before immediately resuming  lying position again.  He only roused himself again at the very end when the words  'refreshments in the parish hall' were whispered in his ear. I take no pride at all in the fact that all 4 boys then shamelessly proceeded to eat their own weight in mince pies. At last count Cormac admitted to six. 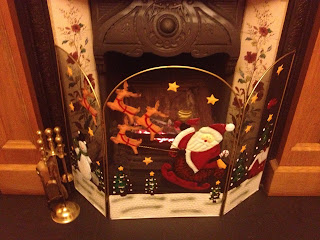 2. I bought this seasonal fire guard yesterday in our local garden centre and seriously, who knew I could feel this much love for such a mundane safety device? Obviously, a fire had to be immediately lit in the grate so that it could be fully appreciated in all its working glory.....and I have to say it didn't disappoint. Don't knock it till you've tried it.


3. An update on my teachers' presents conundrum - you know that friend I told you about, the one who assured me that this year she was giving the whole 'teachers' presents' thing a bye- ball? Well, mere moments before the end of term, I learned that she had in fact bought all round her, as usual. She had so many she actually  needed a shopping trolley to deliver them around the school. (Okay, I may have made that last part up...but still!) So what did I do? Did I stick to my guns and my original plan to go big in June? Nope, I totally bottled it, rushed home and hastily wrapped and delivered those stashed Joules handsets.  What can I say, except that  peer pressure's a bitch! 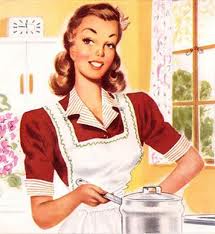 4. That said, I've decided to do it all differently next year. This week my good friend Kim thoughtfully indulged my weakness and made me home made caramel squares as part of my Christmas present.  Which incidentally were To. Die. For. Between that, and Sarah Miles lovely gift idea, I'm inspired. No more Boots 3 for 2 deals for me! Next year, I'm going all Nigella / 'vintage with a twist'. Who knows, I  may even wear a pinny!

5. Finally, I'm on the radio tomorrow. (you know I'm totally screaming and jumping up and down right now!) I didn't tell you before in case they did an Irish News on me, but two weeks ago I was interviewed for 'Your Place or Mine' on BBC Radio Ulster and its on there tomorrow morning!! The downside? It's dead early. Between eight and nine am. So if you've any wit, you'll be sleeping off a Christmas hangover, but if you ARE unfortunate enough to be up, you can tune in to hear my five minutes of (relative) fame. My mum is texting all her mates as we speak so that's a good twelve or thirteen already.
Happy last weekend before Christmas one and all.xxxx