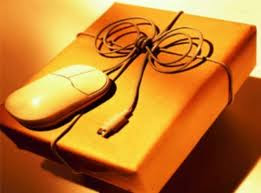 So, there I was this morning,  iPad on knee, coffee in hand, when the house beepers alerted me to someone arriving outside.
Turns out it was my friendly, local, delivery man who appears to do ALL the internet deliveries around these parts, and as a result,  I've got to know him per-itty well.
As usual, he happily popped round to the back door,  had a good old nosy through the kitchen window and clocked me on my iPad.
He's a bit of a cheeky chappie, you see, and we always have a bit of craic- the last time I opened the door, he greeted me with, 'It's a big one this time. Get it away up the stairs before yer husband sees it!'
So this morning, when I opened the door to to sign the electronic thingy,  he quips,
' Penning your big novel, are you?'
' Oh yes,' says I, ready for him, How'd you know?'
'Sure, didn't I read all about it in the Guardian! ( Steady now- that would be the Antrim Guardian, not the ACTUAL Guardian, but still, it took the wind right outta MY sails.)
'What?'  I stammered back.
'Yep', says he, grabbing the upper hand, 'You were away in London for something or other? Housewives? Or something? Anyway, congratulations!'
'Thank you!' I gathered myself, 'I didn't even know it was in there! Maybe if I actually bought the Guardian now and again, eh!'
He laughed and then off he went but closing the door, I quickly discovered that the package WAS'NT actually mine at all, so I ran out after him, but he was already careering off up the lane at a fierce rate.
Five minutes later though and the beepers went again, and there he was back with my ACTUAL package- a plain brown 'Toys R Us' box, (Shhhhhh!), so I handed him back the 'Next' one.
'Oh Aye', I accused him, 'You just assumed that one had to be for me as well, didn't you? Hmmm?'
He laughed agreeably, totally caught on,
'Yeah well, YOU should've known you didn't order anything from Next!'
Drat, he was right...I'd quietly assumed it was a tipsy late night purchase.
'That's true', I conceded grudgingly, 'Sure, I thought I had and had just forgotten about it!'
He laughingly shook his head, clearly relishing his moment, and then headed off, calling over his shoulder as he went,
'Christmas is coming- I'll be seeing you again soon,  I'm sure.'
Cheeky sod- Right again. AND he knew it too. Drat and double drat.
Posted by Emma at 13:40