When I look back at Christmas' past, (and is it just me, or do we look back MORE as we get older?), an integral part of it all was Granny's Christmas pudding. Not just the eating of it, although that was pretty great, but the annual ritual of preparing it, mixing it and cooking it.
Growing up, Granny was like a second mother to me - it didn't matter that she had 11 children of her own, I was her first grandchild and she always made me feel special and important - unsurprisingly, I spent as much time there as I possibly could.
Every year about mid November, Granny started the mammoth task of making Christmas puddings for her children and their families. First, there was the buying of industrial quantities of ingredients, and then the soaking of  fruit in Guinness and brandy overnight.  Next day, there was the weighing, mixing and stirring of several huge basins of pudding mixture, followed by the filling of the bowls, then covering them with greaseproof paper and tying them up with string. Finally, and most time consuming of all, was the 12-14 hours steaming of each one. This took MAJOR commitment -  she often got up several times during the night to top up the water in the saucepans. When they were eventually distributed to each family, I often wondered if they all knew just how much effort had gone into each and every one.
Of course, the best part of all was the eating of it. After being steamed again on Christmas Day, it was almost black in colour, (on account of all that Guinness!), and  heavy, rich and delicious when served up with fresh cream and brandy butter on the side. A veritable heart attack on a plate.
My three brothers in particular, put away vast quantities of the stuff - they LOVED the fact that as an added bonus it made them fart... a lot. Even more than usual, in fact,  which was quite a feat - to them it was a gift that kept on giving,  if you like. The leftover pudding (we always got an enormous one), was wrapped in tinfoil and gradually eaten over the holidays. Actually, it was often just nibbled straight from the fridge and Christmas wouldn't have been the same without it. 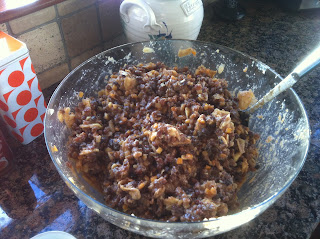 Granny died in March 1999, just a few months before our Anna, her first great grandchild was due. There had been great excitement on both sides of the Atlantic when she agreed to come and visit us that summer in Virginia, but tragically it just wasn't meant to be. Later when Anna was born, I found it comforting to think that she had lovingly held her even before we did. I miss her still. 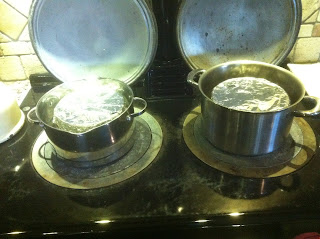 So it's a little bit special to have her handwritten pudding recipe in front of me now and it's an honour to follow in her footsteps with this Christmas tradition.  I'll not lie -there's been a few disasters - for instance,  several years ago, I committed the unforgivable error of letting the pans boil dry. That combined with the use of plastic pudding bowls meant an unprecedented pudding disaster. Unless you prefer your pudding with melted polymers, of course.  Thankfully, the birds didn't seem to mind - I just picked out the plastic and they feasted like kings and that year we had the fattest robins for miles around.
This year I wisely stuck to glass and ceramic bowls, and thanks to Mr Google I also finally worked out how to steam them in the Aga - sooooo much easier, no pesky topping up required and now I'm kicking myself that I didn't realise this before.
And On Christmas Day I'll take a piece and remember my Granny and if it tastes half as good as hers did, I'll be very happy ...(that said, with four boys, we could possibly live without the 'hilarious' side effect of enhanced flatulence!)