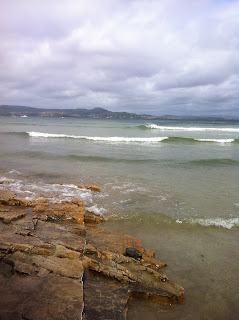 Okay, so I know you're all dying to know how we got on at the caravilla at the weekend.(Just humour me...it's all in the buildup). Well, lets just say that it had it's highs and it's lows. On Friday evening, as we crawled over the Glenshane pass in the pissing rain, complete with an overstuffed minivan and trailer and looking for all the world like the Hillbillies, I must admit I felt a slight frisson of anxiety. As in 'Oh my sweet God what the hell have we done is it too late to get out of it now?' variety. (I know- I can be quite the drama queen when I want to be.)
And it was most unfortunate that those feelings didn't exactly dissipate- we arrived and spent the next 5 hours unloading the car, unpacking plates, cleaning bathrooms and setting up beds, all in the worst possible wind and rain. Rather shamefully, this didn't stop me sending the boys out to play, because although we were one down with Anna in England, six people and a thousand boxes still makes for one very crowded caravilla. When they were offered the glittering options of 'Stay here and clean the toilet, or go out and play in the rain' thankfully, although not unexpectedly, they cleared the joint in 10 seconds flat.
So eventually, by midnight the car and trailer were emptied, the kids were finally settled, and we were climbing into our teeny tiny bed. Okay, I may be exaggerating a little bit, and I'm fully aware that I sound like a complete princess, but we've a six foot bed at home, so a small double DID feel very compact and bijou...but cosy too... in a studenty sort of way!
I also hadn't fully considered the paper thin walls- I mean I KNOW it's a caravilla, but literally we could hear EVERYTHING, which logically means that THEY could hear everything, which TOTALLY puts a dampener on getting up to ANYTHING. Catch my drift?  (On this theme, ANY feedback/advice/tactics from any of you seasoned carravillagers out there is most welcome. (Speak up, you're among friends! )
Moving swiftly on, I awoke the next dark morning at 6am, to Luke battering about, less than a foot away in the next 'room' and the rain battering off the roof above me. Unsurprisingly, and fueled by exhaustion, my mild anxiety had now evolved into a full blown inner panic attack, which Loverboy clocked immediately, and I think possibly even identified with. He got up, brought me in my book, sorted the kids with cereal, and put on the coffee, thus expertly heading off a meltdown at the pass.


Ah yes, my book, which just so happened to be the well known, much discussed "Fifty Shades of Grey'. In fact, only two nights before, I'd been out for a meal with the Glenavy girlies, and everyone of them had either read it, or was currently devouring it. The giggly, wine enhanced discussion that followed is not for your gentle ears, suffice to say, that I went straight home and immediately packed the book for our maiden caravilla voyage. And thank goodness I did, because as it turned out Christian Grey proved to be a MOST diverting weekend companion...At one point I was so engrossed that I was utterly oblivious to Luke happily smearing my new face cream all over the walls beside me. In fact, it was only when a 6 year old Rory climbed into bed with me, and from over my shoulder began to identify and read aloud high frequency words from my page, that I forced myself to put it down....for a good hour anyway.
The torrential rain continued all morning, and without the diversion of TV or computer games it WAS testing in such a confined space, but with the help of magnetix, monopoly and a box of magic tricks (thank you Sheileen!) we made it through. Later, while walking on the beautiful beach, the sun suddenly came out and it was like God smiling on us. And as we watched our happy boys clambering on the rocks and looking for crabs, I felt very lucky, and KNEW that we'd done the right thing. Then we all turned and walked back to the caravilla for pizza.
Posted by Emma at 17:10