Thinking out of the box 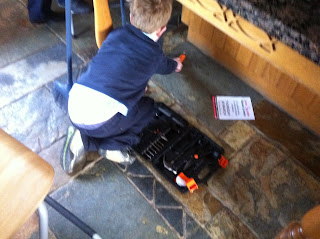 Here's my little workman on the job! Despite the fact that I only asked him to sweep up the inevitable rogue Cheerios after breakfast, he found it necessary to utilise his new (real!) tool kit. A particularly stubborn piece of cereal had glued itself to the tile and after preliminary attempts to unstick it failed, the big guns were called in and a Stanley knife carefully used  to prise it off. Job done and what a guy! The workman's bum was simply a delightful bonus! 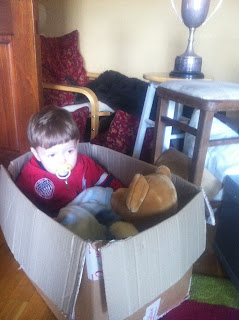 Speaking of boxes, it doesn't seem to matter how many toys are available, there's always a scrum  when large cardboard boxes appear. Here Luke shuns traditional seating to watch TV in the comfort of customized cardboard. 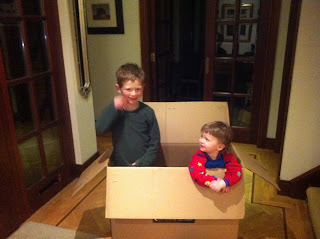 This week, the two youngest boys upgraded to the increased square footage of this bijou studio. Many happy hours have been spent relaxing, eating and conversing, all within its cardboard confines. Their favourite game is to take it in turns to be the 'present' while the other unwraps it with delighted (and quite realistic) surprise. It hasn't got old yet.... not for them anyway.
Have a great weekend. What's that you say? What am I up to? Well, since you ask, Himself and Myself are off to the lovely Nuala and Stewart's wedding today, followed by an overnight stay and that elusive hotel breakfast I ranted on about missing a few weeks ago. Oyster Bay stowed in bag for later-check. Bottoms up!
Posted by Emma at 11:21