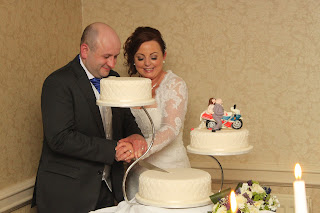 A while back, for about five years, I would have described myself as a professional wedding guest- many of our friends were getting married, and if requested, I could have provided a detailed assessment of most local venues, covering (but not limited to) overall comfort, food quality, (including finger buffet and breakfast), staff friendliness, free toiletries and indoor/outdoor photo locations. Then gradually a different pattern emerged on our social calendar-a decrease in weddings marked the start of the 'Christening era'.
In light of this, there was definitely something a wee bit special about my friend Nuala's wedding last Friday. I mean, of course I was excited at a child free day out, and obviously the hotel breakfast was a big pull, but most importantly, I was taken unawares at how very emotional and meaningful it was. Don't get me wrong, every wedding is (hopefully!) meaningful and every bride and groom special, but when two people meet a little later in life, I think that there can be a greater appreciation for what they have found. Over the years, frogs have been kissed, hearts have been bruised, and then THAT person comes along, and maybe suddenly, maybe gradually, barriers come down, and love finds a home. On Friday, as we all stood and watched Nuala and Stewart commit themselves to each other, there wasn't a dry eye in the house. A few wise ladies had come prepared, generously passing tissues around to those of us who were reduced to using our sleeve.
The funny thing was when I turned on Radio 4 this morning quite of my own accord- I usually only turn it on when prompted by a terse text from my mum-('Turn on Women's Hour NOW- v v good') and I then do because
a) she'll probably grill me on the topic later
b) it's not worth explaining why I didn't ('I don't know why you listen to that Frank Mitchell- he's an awful windbag!'), and
c) it's actually pretty interesting as it happens.
Anyway, I turned it on and this week they were featuring the origins of marriage and someone very famous ages ago, had once described marriage as 'an exercise in hope over adversity'. Now, having been married almost sixteen years myself, I would say that there's more than a small grain of truth in that. Also, if I could be so bold as to offer a teeny piece of advice for the new Mr and Mrs R, I would say to hold on tight to all that hope and love you feel today-nurture it, watch it grow and with a bit of luck, the adversity part won't stand a chance.
So, after the ceremony, it was on to the important stuff, like drinking, eating and dancing...and rest assured all three were enjoyed with gusto. I had a lovely, long gossip with my uni friend Ms BT9 who probably has the best and longest memory for people of anyone I've ever met- she honestly knows EVERYONE! I then reverently admired and lusted after her beautiful (and real!!) Chanel bag, and the fabulous new Tom Ford makeup within, while simultaneously  kicking my own 'quirky' clutch complete with cracked Rimmel compact safely under the table.The music and dancing went on for hours, and despite at one point bolting mid conversation onto the dancefloor, upon hearing what I thought was the Grease Megamix, but which actually turned out to be One Direction (cringe-bobbed and jigged about a bit then slunk back to my seat), it was great craic altogether.
So many congratulations to the new Mr and Mrs R, who are off today on their honeymoon- thank you for a wonderful day and here's to a life filled to the max with hope and with only the merest skim of adversity. xxx
Posted by Emma at 14:51