I'm supposed to be on the road to Drogheda with Loverboy right now. Oh yes indeedy, we had dinner plans, Christy Moore tickets, an overnight in a hotel and a lie in scheduled. Followed by breakfast and newspapers and endless coffee refills. In a hotel. Did I mention that? One dark, tipsy, Friday night last Autumn, an evening with Loverboy and Christy (you know what I mean!) helped chase away the SADs when Spring seemed so far away. But the best laid plans and all that, because it just wasn't meant to be.
My mum has been under the weather this week- nothing too serious- but despite her inevitable protestations, I knew that the addition of five little houseguests was way too much for her and I pulled the plug. So, instead of flying down the motorway, tall skinny latte in hand ,(yes, I'd penciled that in too), I'm sitting  in the kitchen on the couch. Teletubbies is on- the same episode that I've seen at least 20 times- and it's a horrible rainy day outside. My revised plans for the evening now entails cutting all four boys hair, followed by a production line of showers and hair washing. It also includes making up beds, cooking dinner and washing uniforms. In other words, except for my barber shop stint, it's like any other Friday night round here. No big deal, it's only that my expectations were a little higher and a bit more self indulgent, I suppose. A bite to eat, a few cheeky wines and a bit of 'Ride on' and 'Lisdoovarna', courtesy of Christy. Followed by that aforementioned lie in and brekkie. Ah well!

But sure, you know, it's not all bad- Luke is snuggled up beside me, and I've just had a yummy slice of chocolate cake and coffee made with hot milk, just the way I like it. Loverboy has finished work early and we're going to tackle the boys grooming and bathing requirements between us.  And for the first time in ages, we have a quiet weekend ahead which, after a month  of mad busyness is pretty special in itself. I'm also fairly sure that Christy will sound almost as good in our kitchen later on, especially after I get stuck into that bottle of Oyster Bay in the fridge! Oh and here's a little note I got from Rory this week which made my heart melt and my face smile.... Happy weekend everybody! 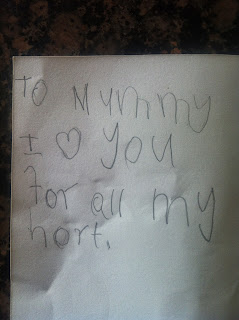