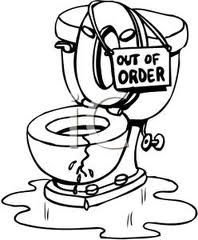 It started off badly and went downhill from there. A week ago, I'd done my bumper bimonthly grocery shop online, ( it took 2 hours and came to over £300), and was due to be delivered yesterday. (I also do a weekly shop, but this is serious bulk buying, as in 40 packets of cereal and 50 loo rolls-I kid you not!). Anyway I'd ordered from Sainsburys this time, just for kicks, and logged on to the Interweb the other night to add bleach. (Yes indeed-that's what I was up to at 10pm on Valentine's Night - I sincerely hope that yours was a tad more exciting!)
Then, all of a sudden,  my monster grocery shop went inexplicably AWOL. One minute it was there, the next lost somewhere in cyberspace. Quick as a flash, I sent them an email telling them what had happened and assuring them that I still wanted our lorry load to arrive between 11 and 1 the next day. Ha!
Next morning, of course, I got an automated response confirming that it had been cancelled (It had not!) and sincerely hoping that I would shop with them again. Cue my first murmured FFS of the day, but it certainly wasn't my last. Obviously, I then sent them a snotty email telling them that hell would freeze over before I'd shop with them again and they could shove their groceries ...or words to that effect. Then, because I STILL had no bleach, and we were down to our last three packets of cereal, I had no alternative but to spend the next two hours doing a similar massive shop on Tesco instead. FFS! Which only meant that my exciting morning plans of tackling the ironing pile so large that I could no longer force the cupboard door shut, was now my afternoon instead. FFS!
Prior to this, I had morphed into 'Tiger Mother' mode, (which in Ireland is just being a complete targe), turning off the TV, (this went down a treat as 'Spongebob' was on), and organising chores, piano practice and project work. To tell you the truth, all of my Tiger Mother buttons had been well and truly pushed the night before, when I'd been informed that my nephew, who's only five, is currently reading the entire Roald Dahl collection ON HIS OWN... FFS! So, with a renewed fire in my belly,( but not in theirs- It's half term after all), extensive reading material was chosen and new guidelines for personal and guided reading put in place. As you I can imagine my popularity levels are currently through the roof. FFS!
Logged into Tesco in a grim but determined mood, and I was nearly done by lunchtime. The kids were playing outside, Loverboy was munching on a sandwich, wisely leaving me alone to calculate the price of loo roll, when we became aware of the sound of gushing water in the background. Thinking that one of the kids had left the tap on in the downstairs loo, he went to investigate to find that the cistern of the toilet had only gone and cracked completely, and water was pouring out all over the floor. FFS! FFS! FFS!
Surely, this must scoop top prize in 'Crappiest Toilet Luck EVER'? Utter panic ensued- it was just like 'Titanic'. Naturally, the children relished the drama, rushing for torches and towels and later, hosting guided tours of the offending site for the neighbours' kids.
The upshot is that it looks like we're going to need a whole new toilet, because you can't buy just the cistern. FFS! And further preliminary investigations have indicated yet another issue - Oh, why am I not surprised? Apparently, champagne coloured suites are now so passé that they're like hens' teeth, and we may have to go for a white one... which consequently would mean a whole new bathroom suite. For lack of a cistern the entire bloody bathroom may be lost. FFS! (screaming now!)
Later on, and with the ironing finally done, I'd pretty much lost the will to live- my mood was black and I didn't care who knew it. There was more to come- lying in bed late last night, the pipes in the attic began to make a very loud, dubious clanking noise... for a good ten minutes. My overly optimistic husband assured me that all it needed was a squirt of WD40, (don't we all, love), but because I'd just finished watching 'Death Unexplained ' about a coroner's office and combined with our indisputable bad plumbing karma,  I was tearfully convinced that I was about to clock out, in a most undignified fashion, by being squashed with an exploding water tank in my own bed. FFS!....Then I fell asleep.
Posted by Emma at 16:40