Lordy, Lordy, there's been another miracle around these parts!! You may remember that a few months ago we were witness to the Miracle of the Keys (which still completely blows me away and full credit must go to St Anthony for their astonishing reappearance), but now I give to you the (lowly, but aptly named) 'Bread knife Miracle'. 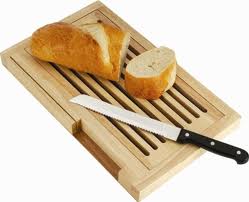 I had noticed a few weeks before Christmas that our bread knife was missing. Although it's a fairly crap bread knife, and could really do with a good sharpen, it's the only one we've got, so I carried out a thorough search of the kitchen cupboards and drawers, followed by the children's bedrooms ( you never know!) but  to no avail. So then I did the next most logical thing.. and blamed it on Loverboy.
Now, before you start heckling me, he has form in this department. He quite regularly removes innocuous household items and uses them for his DIY purposes. My bread knife in particular, has been a casualty in the past- it was abandoned in the attic for weeks after being used to cut layers of loft insulation ( no wonder the bloody thing is blunt). My meat scissors have been similarly appropriated for cutting wire, and most tragically of all, my lovely cream Le Creuset kettle was left on the roof of the car, whereupon it crashed to the tarmac, after being used to defrost the windows.
In light of this, I fully admit that there was no 'innocent till proven guilty' principle in operation, as I rounded on him, 'Wheres my Breadknife? What have you done with it? It had better not be lying outside in the rain somewhere!' Blank denial followed, which, needless to say, I totally disregarded, because I just KNEW it had to be him. It's not that I thought he was lying as such, just that he had lifted it in passing to- I don't know- service the car or chop wood or cut the hedges back, and then completely forgotten about it. He displays this type of 'mildly endearing but mostly frustrating' behaviour fairly often..
But, over the next few weeks, instead of turning up, as these items usually do, it stayed lost. So, from time to time, usually when I was attempting to slice a baguette with a cheese knife, I'd (quite) good naturedly accuse him again, ' I know it was you...AND I know what'll happen! Some day it'll reappear in this drawer and I'll know that you sneaked it back in when it turned up down the back of the boiler or something. So, don't bother denying it when it happens, cos I'LL know.' It's possible I may even have uttered the phrase 'I've got your number' as well. (OK-this definitely has a touch of the 'ballbreaker' about it.)
So, life progressed in our bread knifeless household as normal, until last Sunday when I opened the big cutlery drawer, to get a knife out to slice some wheaten, and lo and behold, there was my bread knife on the top of the drawer- the very same drawer I'd pulled apart looking for it! Momentarily astounded, my next thought was 'Aha! Exactly as I predicted! I feel a showdown coming on! ' or something akin to that sentiment.
So later, as Loverboy was out at the time, I brandished the bread knife triumphantly at him, ' Well, lookie here what just turned up in the cutlery drawer! Surprised?? I don't think so!' But instead of the sheepish laughter I'd expected, he was completely shocked, like genuinely stunned, because really, he's just not that good an actor. Then, quick as a flash, he quite competently, tried to flip it round and blame ME - 'Oh ho, so it was actually your cunning ploy and was you all along!' and other such nonsense. As if!  Eventually though, we ran out of steam and just looked at each blankly,  'So, if it really wasn't you then who was it?'
Then of course, we asked the children, even going so far as to imply a reward might be unearthed for whoever had found it, but to a man, they denied all knowledge. And to be fair, they didn't really 'get' what all the fuss was about anyway.
So there you have it! St Anthony wasn't invoked this time, as the loss of a bread knife is genuinely a lot less traumatic than the loss of your keys, so unless he quietly throws in a 2 for 1 deal, or there's a 6 month policy covering all lost items, we're completely stumped. One friend cryptically announced that it's the work of angels, but really??? Loverboy immediately dissed that idea, and I have to admit, that I too, am more than a little skeptical. I mean, surely they'd have better things to do?  It would have to be a really slow day for them to worry about a bread knife going astray!  Perhaps, if I had borne the knife's disappearance with a quiet and dignified restraint, and maybe even offered it up, I might have been in with a chance....but you read my fishwifely reaction and that's quite a stretch!
So there you have it- we're completely in the dark....metaphorically speaking. If you have any illuminating input, explanations or similar stories, please do share... Emx
Posted by Emma at 14:58