The Town Mouse and the Country Mouse 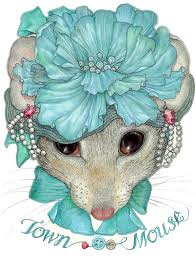 Oh dear, how I hate January! Despite the fact that I'm definitely ready for Christmas to be over when it rolls around, I always wish that I could just  fast forward to the first week in February, and thus bypass the whole January buzzkill completely .
For me, along with the extra muffin top and the school runs in the dark, my annual country vs city struggle inevitably reaches it peak right about now. It tends to build momentum as November closes in, is temporarily sidetracked by Christmas, and then returns full throttle in the New Year. Oh yes, as you can probably imagine, Loverboy just LOVES me in January! I know that he grits his teeth as I do my nightly online property search, scouring suitable houses within the city limits ( OK then-it's mostly BT9,) for our tribe to move to. Unfortunately though, unless I plan on selling a kidney, or a couple of children, they're few and far between.
Out here in the country, we're lucky enough to have lots of inside and outside space- a real necessity with a big family. What we DON'T have is proximity and convenience to pretty much everything and I find that a real drag. Growing up in the city meant that I took for granted being able to walk to chic shops, numerous restaurants, gourmet cafes and friends' and family's houses. Our previously unplanned decision to move to the country six years ago, was driven by a house sale falling through and our fourth child's imminent arrival. (Oh and for the record, I don't believe that Loverboy has ever REALLY appreciated the depth of trauma suffered, on moving here a short month after Starbucks opened at the end of our street - just saying.. )
I think it's probably what you're used to-what you grow up with, I mean- because I remember years ago, on first contemplating a move to just outside Washington DC, several people here cautioned ' Are you sure you want to move to the murder capital of the world?'  Then, when we got there, and folks learned we were from Belfast, THEY shook their heads and sympathized 'I'm sure you're glad to be out of war torn Belfast!' Similarly, but less dramatically, when we mentioned that we were moving from the city to the country, shocked Belfast people clucked reassuringly, 'Don't worry, it's not forever', while country people congratulated us on getting out of the dirty old city!
I suppose that everyone wants to believe that where they live is the best. And maybe it is...for them. As a city girl, I HAVE found aspects of the transition tough. (Really!? I hear you say disbelievingly!) I find that I miss silly things like footpaths and chimney pots and horns beeping.... and family. But thankfully, as February creeps in and with the promise of Spring just around the corner, I begin to notice and appreciate again all the really great things about living here. The wonderful school, the best of  friends, the real sense of community, the idyllic childhood our children love, the space around us, the changing of seasons...and as for the rest-well, a diesel car, a good taxi firm and filling our lives and home with friends and family all helps.
You see, I'm only too aware that it's not just all about me, me, me-there are six others living here as well, and we DO have a good balance for now. That will naturally change over time, and if I'm honest, I know that we won't be here forever - as the children gradually migrate from our little corner of the world, I'm pretty sure we'll follow. But in the meantime, during the winter, and most especially in January, I'm sucking it up, knowing that Spring is a-coming and anyhow, I know how to make a skinny extra hot latte even better than Starbucks!
Posted by Emma at 20:25