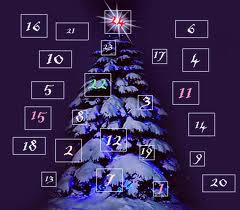 1. It's now just 3 weeks to Christmas. How did this happen? It feels like just the other day was Halloween. And just before that was summer. Is this an age thing?
2. After persistent pestering, I braved Tesco last Sunday afternoon with the 5 small people to purchase advent calendars. Who would have thought that 25 little pieces of Cadburys would cause this much excitement? (Helloooo-PMT calling!) To avoid confusion and subsequent war, names were stuck on each one and individual hiding places found. Despite fierce lobbying, they remained unopened til Thursday, when the chocolate shaped Christmas pudding was swiftly inhaled by all. There's ongoing feverish speculation about a numberless window on the calendars, and lively discussions as to when this one should be eaten. Yes...really.
3. Also on the Advent theme, I really want an Advent wreath but can't find them anywhere. And where on earth do you buy pink and purple candles anyway? If you can shine some light on this (sorry,sorry!) then please do share.
3. Overheard-
Cormac (age 7)- 'Doesn't Santa have 14 reindeer?'
Jude (age 10, speaking very knowledgably)- 'Oh no, Cormac, he's only got 9! Their names are Dasher, Blitzen.....etc.'
It's as though a certain 'There's no Santa ' conversation with Jude didn't happen last year and before you ask, he's not that good an actor. If he were acting, I would have been receiving knowing looks and big obvious panto winks.  I can only surmise that he's buried the memory of the chat entirely, or concluded that it was all a bad dream..
4. Artificial vs Real Trees- IMHO,  real trees are totally overrated , expensive and downright unpredictable. One year, we had a 16 foot tree in our hall- it took 3 days to decorate and we couldn't even reach the top to put the bloody star on. As for the pine needles? Don't get me started. Even getting the bugger in and out of the front door was just waaaaay too much hassle. Then last year, he brought home a baldy toilet brush excuse for a tree.... Costing 40 quid. We vajazzled it to the nth degree with lights and shiny decorations because although you can't polish a turd, you can sprinkle it with glitter and call it Christmas.And we did. So this year, I'm taking control and I'm on a mission to find a beautiful, full, green, botoxed creation, preferably with built in lights, possibly with fake snow. I'll let you know how I get on.
5. Staying with the tree theme, call me old fashioned but I'm just not a fan of November erections (sorry- couldn't resist!). It's double figures in December before the tree goes up around here, and it stays there till 6 January or until my excess needle alarm is triggered- whichever comes first.
6. Gingerbread latte from Starbucks (skinny milk, fat cream-they cancel each other out)  -When did this become an essential part of Christmas for me?  Haven't had one this year yet, but putting that right this weekend.
7. Out with the old, in with the new- pre-Christmas preparations for me include an annual toy room clear out,  and although it's a dreaded day long job, the shelves and the soul are cleansed when it's done. This year, I cunningly planned it on the day of the Strike, so several resident strikers crossed the picket line to help me fill the bin bags.
8. The beautifully innocent logic of a five year old Rory as he artfully delivers a crushing body blow of guilt, and instantly guarantees the top spot on my Christmas to-do list.
'Mummy, last year I asked Santa for a radio controlled aeroplane, but he brought me a radio controlled car instead. This year, I think I'm going to ask him for a car and maybe he might bring me my plane.' Ouch!
9. Finally, it's Friday, it's December, it's wine o'clock. Make mine a mulled.....
Posted by Emma at 18:17