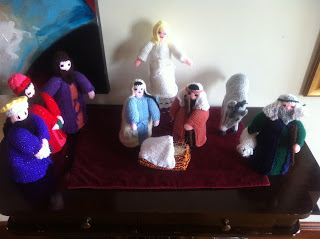 Here's a little piece of Christmas kitsch that I just had to share with you- an entire hand knitted nativity scene! I know!  There's even a donkey! (I'm not quite sure who the shifty bloke in purple at the back is- he's already been cast as Joseph, a shepherd and now a king. With only 2 proper kings, I'm prepared to overlook the fact that this cheapskate has no present and no crown ). I've coveted one of these babies since I spotted it at my son's nursery a few years ago-a very talented local  lady makes them and  has donated them to the school and church-and yesterday the stars aligned and I became the proud new owner of a set myself....
We'd gone to Mass and it was the usual headmelting session with 19 month old Luke, except that  this time he upped his game and thoughtfully filled his nappy. (Better an empty house than a bad tenant, I suppose!) As the stench began to circulate, so did the knowledge that I had no spare nappies in my Tardis of a handbag. So Loverboy actually had to drive home to change him while I stayed on at Mass with the older four.
Afterwards, it was over to the annual Christmas apostolic sale in the primary school. This is always a bit of a mixed bag-there's the usual crap tombola- 7 year old Cormac 'won' a shower caddy, then understandably enough wanted his money back.(Born lucky-last year he won a travel iron at the same event.) There's also the ever popular bric a brac, craft and cake stalls and of course, Santa's grotto. In short, it's a good opportunity to chat, drink coffee, eat cake and pick up the odd bargain...and it's all for charity. So after a quick mooch around, then buying some gorgeous homemade butterfly buns, we got into the queue for Santa. There, an elderly grey haired 'elf' cleverly controlled the flow of mayhem into Santa's grotto, and the overexcited noise level, with free lollypops. 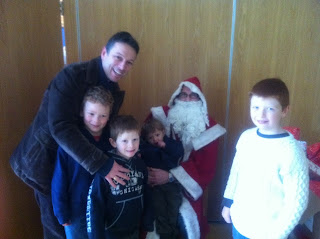 Finally, in we went with the four boys and predictably enough, Luke began to scream when we placed him on 'Santa's knee. (Santa's glasses and suspiciously familiar Derry accent were reminicsent of a good neighbor of ours, but the children seemed none the wiser.) We got the money shot, were given the age and gender appropriate presents, and bid Santa good bye. With the wheels now coming off , we were on our way out the door, when I clocked the nativity scene on the craft stall and before you could say  'No room at the inn', I'd crossed her palm with silver and was its proud new owner.
It may possibly have to do with the fact that I was in the 'special' group for knitting and sewing in primary school (Why can't I make gloves too? Why?), and managed among other mishaps in secondary school to hem my baby doll nightie to my school skirt. (Sidenote-in actual fact, it was a baby doll nightie with matching knickers -in retrospect, surely a surprisingly inappropriate choice for 13 year old convent school girls? ) So possessing no flare or talent in this area whatsoever, I am in jealous awe of anyone who does, and the next best thing to actually purling Mary and Joseph myself, must surely be their procurement in the name of charity. If ever there was a holy, guilt free spend, a blessed bargain, a Christmas cracker, then this must be it!
Posted by Emma at 14:40