Last week, I wrote a post sharing a wee bit of good news with you. I read over it, edited it, added links to it and finally hit 'post', and then somehow inexplicably and extremely annoyingly, I managed to permanently delete it. Grrrrr!

Since then I've had a birthday- forty three since you ask- which sounds 'sooooo old!' or 'still quite young!' depending on who you ask. And me? Without wishing to sound trite, the older I get the more appreciative I am to just be here at all.

But back to my news. (Yep, my light's still on!) Two weeks ago I got an email telling me that I had received a full bursary to attend the John Hewitt International Summer School later this month.
A whole delicious week to attend lectures, talks and workshops, to listen and percolate in the literature and poetry of the likes of Bernard Mc Laverty, Joseph O'Connor and Ruth Padel- basically to soak up inspiration and knowledge and words to my hearts content. I'll even get to hear Michael D Higgins, the President of Ireland speak, (while simultaneously assessing his likeness to an actual leprechaun IRL.)

Did I also mention that the bursary also includes a bed to myself and a full Irish breakfast every morning? And is it wrong that I'm just as excited about these as all that literary stuff? No shopping for groceries, no meals to plan, no laundry to sort, no refereeing the endless in car bickering, no 'if that doesn't stop by the time I count to three...'. I could go on but you get the picture. I'm excited. Much.

And honestly? I'm also a little nervous too because you see, I've never done anything like this before, like never. Yes, myself and Himself have been lucky enough to get a few days away together on our own from time to time over the years but alone? Just l'il old me? Never.

And it's not as though I look back and realise that I always had a burning desire to write. To my shame, I never even did GCSE English Literature at school, and certainly no teacher ever pulled me aside to mention any special talents...in anything really. 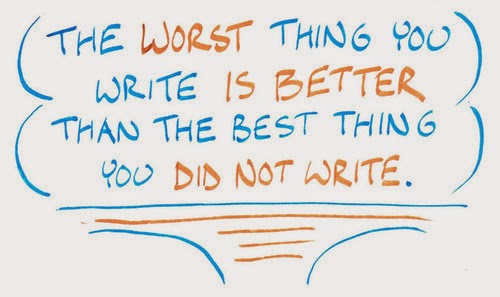 Looking back, I can see that I just drifted aimlessly along the well trodden paths of others, familiar yes, but with no real insight or self awareness into what lit me up and made me tick and feel truly alive.

And yet somehow, all these years later, and quite by chance I've felt an awakening in my soul-a love for words and a desire to write honestly, about everything and nothing. A need to purge the words onto a page or screen, and to feel the satisfaction creep through me when I do.

Wise people say we should write what we know. The thing is, what I know is often the mundane and ordinary stuff-the nuts and bolts of an everyday parenting life. But still, writing about it scratches an itch I didn't even know I had, and when it sometimes resonates with others as well,  then that's the flake in my 99!

This year, I went to a writing class and through that I also began to hear about local literary festivals and events I was never aware of before, like The John Hewitt International Summer School in Armagh. Our teacher had told us about the bursaries available, so I filled in a brief online form, explaining why I'd like to attend, and what I'd like to learn, and then a few weeks later -whoop, whoop- I got the email! Just A little bit of luck...and maybe they felt sorry for me, because I may possibly have dropped in 'five kids and not a minute's peace!' in the 'Why you?' Question.

I tried explaining all this to my mum but she just won't listen, because in her mind, I've just won the equivalent of the Man Booker Prize, or possibly become the new Poet Laureate. It doesn't matter at all that she's (thankfully) never read my blog- she's only just learned to google Boden- so she explains vaguely (and a little bit worryingly) to her friends that's it all about me being an unfit mother... or something.

This new information has clearly upped the ante though, and an unmissable opportunity for publicity arose when a new M&S opened in Belfast last week, so on its opening day, the vast majority of Belfast's over 35 female population arrived en masse to give it their seal of approval. My mother, of course, was among them, and after extensive browsing, followed by afternoon tea in the new cafe, it seemed that she punched in the next few hours happily bumping into familiar faces in the flowers and plants department.

'Seven different people!' She delightedly informed me. 'And all just on our way out the door, and of course I told them ALL about your prestigious award.
'What?,' I said alarmed. 'It's not an award! It's just the chance to listen to proper authors talking, and a few workshops to hopefully get inspired myself, and then there's the free breakfast.'

But the shutters were down and she was clearly having none of it.
'Nonsense. You're always putting yourself down. It's an award,' She said firmly, and the conversation was closed.

So if you DO meet my one woman PR machine in the new M&S, just to clarify, it's most certainly NOT an award, but for goodness sake, don't tell her that...just nod and smile unless you want the head taken off you. And award or no, I'm still well chuffed, and feeling a bit like this actually.