Time for a Story?

Why is it that I can come on here and spout effortlessly about everything and nothing, and then suddenly get all shy about a wee story? It must be because writing fiction is so new to me and I'm really just finding my feet. But, inspired by my longtime blogging friend Sarah Miles, who has just won a Mumsnet writing competition AND published her first anthology of poetry (no pressure then!), and knowing that you gotta start somewhere, here's the little piece that I wrote for last week's writing class.....I'll be upstairs hiding in the wardrobe if you need me.
. 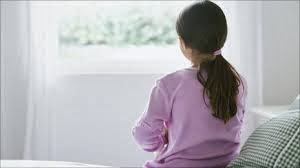 Clare was a very lucky girl. Everyone told her this so it must be true. To have another baby sister to love and to cuddle, to play with and to push up and down the street in the pram. Her friends all envied her. The problem was that she didn't feel lucky at all. Maybe there was something wrong with her?

She'd met the new baby earlier that day. Daddy had brought her and the others into hospital to see Mammy, and all of them had crowded around the cot for a first peek at their new sister. 'Isn't she beautiful?' Her Daddy's big smile showed all of his teeth. 'Everyone say Hello to your new baby sister

Clare had looked down at that red, scrunched up, little face and wondered why she didn't feel any of the lovely, swirling bubbles of excitement in her tummy she had the day that Daddy took her to see ET in the cinema, just the two of them. She'd felt really lucky then.

They'd cleared the dishes after tea and he'd put a finger to his lips and whispered, 'The others are too young, Clare. It's just you and me tonight'. Then he'd slipped her hand into his. She'd felt so special and grown up. When they'd got there, he'd bought her a coke all for herself, and they'd shared the biggest box of popcorn she'd ever seen, munching on it together in the velvet darkness. Just the two of them.

Later, at the sad part near the end, when ET said goodbye to Elliot, she'd felt the lump rise in her throat, but she'd snuggled into his scratchy, blue coat and felt safe and loved and very, very lucky. She didn't feel anything like that right now.


Josie Fitzpatrick had once told her that her Ma and Da had wanted loads of kids but they'd only been able to have her. She'd said that her Mam told her she'd two wee brothers and a sister in heaven, and she'd meet them one day, but sure what good was that here and now? She'd said that her Mam had pictures in her purse she looked at when no one was around, but Josie always knew because her face got all red and blotchy.

'You're so lucky', Josie had sighed that morning, 'Your Mammy gets a new baby nearly every year and mine only got the one'. A pause. 'Do you know does she do an awful lot of praying to St Gerard Majella?'

Clare's brow furrowed as Josie continued. 'You see, my Auntie Joan told Mam that if she did a daily novena to him for 9 days, and put £1 into the box under his statue, she'd be guaranteed a baby by
Christmas, but it didn't work.'

'Noooo, I don't think so,' Clare thought about it seriously, 'I never heard his name mentioned, but I'll ask her, if you like?'

Later on, she'd wondered if this was the root of it. Maybe years ago, her Mammy had done such a brilliant Novena to St. Gerard, that he'd taken a special shine to her, and now just kept on sending babies. Maybe Josie's Mammy wasn't doing it right, but if Mammy could show her how to do it properly, then maybe St Gerard would stop sending babies to their house and send them over to Josie's instead?

She thought of Josie's house with the window boxes filled with flowers and the shiny red door that opened into a wide hallway. She'd noticed the space first at Josie's 10th birthday party last May.
There'd been none of the many prams and toys and children that cluttered their own hall.

Then she'd gone into the bright kitchen, all painted sunshine yellow with photographs of Josie over an entire wall. There was Josie as a baby, Josie starting to walk, Josie starting school. It was Josie's life in pictures, with lots of wall left, presumably for those yet to be taken. Did Josie not look at that wall every single morning and feel like the most special girl in the world? Without thinking, she'd blurted the question out, but Josie had just shrugged and led the stampede of girls up to her bedroom, with its pink rosebud curtains and eiderdown, and her very own tape recorder on the dresser.

Sighing, Clare looked around her own cramped bedroom, with the bed pushed into the corner and Mairead's cot shoved into the other. She didn't know where this new baby would sleep when she no longer fitted in the carrycot at the end of her parents' bed.

She thought of the precious shoe box under her bed, where she kept all the things she didn't want the little ones to find, and then break or tear or lose . There were her books, her secret diary, the Jackie magazines passed on by her teenage cousin and the soft blue velvet hair ribbons. There was also her musical jewellry box she'd got for Christmas, with the tiny ballerina, that rotated listlessly when the lid was opened.


Inside were the gold studs she only wore on very special occasions, and the tarnished silver baby bangle she'd got as a christening gift. It no longer fitted her of course, and she knew that she should give it to Mairead. It would look so pretty on her chubby little wrist, and the kindness of the gesture would make her Mammy smile, but she just couldn't bring herself to part with it. When she looked at it, it reminded her that she had been here first.

She wondered how she could feel so alone amongst so many people. Even earlier, in the bustling hospital ward, with all her family around, she'd had to remind herself to smile, and nod in the right places. She'd tried to push the unbidden memories from her mind, and repeated the mantra that this time would be different, would be better.

She remembered her Mammy's face, so pale even against the white sheets. She had noticed her tired
smile, and knew that the smile would disappear soon enough, but the tiredness wouldn't. She'd caught sight of the thin tube snaking its way from Mammy's hand to the plastic bag on the hook above her, and without thinking her fingers had tightened around Mairead's chubby little hand so hard that she'd yelped in indigation.

'It's alright, Clare'. Her Daddy had seen her anxiety, 'they're just fluids to make your Mammy better, to help her get stronger.'
'But why? Why does she need made better? Did the baby make her sick?' They'd laughed at her then, shaking their heads and sharing a smile that excluded her.

'Isn't your sister a wee dote, boys?' her Mammy had asked the brothers, and they'd pushed and shoved each other out of the way to get a better look. As Ronan traced a grubby finger across the little cheek, her father had gently admonished him, 'Mind her now Ronan. She's only small, son.'


She'd looked at her again, this Teresa with her tiny clenched fists and her shock of dark hair that reminded her exactly of the old toilet brush in the bathroom at home, and felt nothing at all. So it had surprised her, when a moment later white hot anger charged through her like paper up a chimney, but even then she'd kept her smile steady and her eyes fixed on the baby in the cot.

Why did they all look so happy and pleased with themselves? Didn't they know what was coming? Or had they simply forgotten last time, and the time before that? Didn't they remember the darkness in the house, and how they'd all eaten cereal for dinner for weeks? Or that Mammy had worn the same nightdress for so long it smelled, and that the baby cried and cried and only stopped when Clare came in from school and made her a bottle.

She'd learned quickly, or maybe she'd just remembered from before. How to even off the scoops of formula with a knife, how to warm it carefully in a saucepan on the stove, how to check that it wasn't too hot by testing a few drops on the back of her hand. She knew how to fold the nappies properly in the special kite shape for a girl, and how to turn the safety pins in on themselves, so that they didn't dig into the baby's skin when she was putting them on. She knew which bucket was for steeping the dirty nappies and which was only for the wet ones.


She'd always remembered to put them through the washing machine and hang them up before she went to bed herself, or there'd be no clean ones for the morning. She learned how to make her Mammy a cup of tea, even though she knew it would grow cold as she stared at the wall and shredded tissues into tiny pieces in her lap.

The shredding had finally stopped as the first daffodils appeared in the flower bed, and slowly life had turned from black and white into colour again, just like in 'The Wizard of Oz'. But earlier, as Clare had stood in the bustling glare of the ward, her fingers gripping the edge of the cot, she'd known that it would all happen again, that there was nothing she could do, and all around her people smiled and ate grapes and told her how lucky she was.
Posted by Emma at 08:21