Taking A Step Back

I'm off to London today, (or 'Londing England' as a friend of mine insists on calling  it!) . Yes indeedy, as my prize in last September's MAD Blog Awards, Loverboy and I will be living it large all weekend - nibbling on afternoon tea, taking in a West End Show (Mamma Mia-here I go again!), quaffing cocktails and inhaling the 'all you can eat breakfast' - seriously, what's not to like?
Which is why there's a certain irony in what I'm going to say next... I've decided that it's time to take a step back from my blog. Not forever, mind you, but for a while. After almost two years and over 300 posts, I feel like I need a wee break.

'Adventures of an Unfit Mother' began as a much needed outlet, a place to find my voice, somewhere I could  be creative and completely honest.(Possibly toooo much at times!) It's been all that and more and amazingly it's grown steadily along the way. From just my sisters and a few friends, I now have 500 people visiting on a daily basis. Which, incidentally, is nothing compared to the big blogging fish out there, but quite an achievement for l'il old me. It's a massive compliment when people take the time to pop in, and even better when they come back and stay on to shoot the breeze as well.

The writing of it has always been the the fun part for me.....but I'm really useless at the rest of it.  For you non bloggers out there, I'm talking about the whole PR side of it all - the Twitter presence, the numerous blogging platforms, Instagram, Pinterest and the rest. Then there's the commenting on OTHER people's blogs (I know one blogger who rotates visits on 30 different blogs every freakin' night!), the blog hops and the forums. Because the truth is, if you want to grow your readership,  you've got to do all of that and more... but I can barely keep up with writing my own posts, never mind that side of it as well. So it all comes back to the initial purpose of the blog, which was as a head clearing space for me...so maybe none of the PR stuff  matters anyway at the end of the day. (Although honestly? I think it does a bit...maybe I'm more ambitious than I first thought!)

My main problem is time, or really the lack of it. Some posts take longer than others but I'm finding it hard to keep up with 3-4 posts a week while juggling everything else and holding onto my sanity. It's making me snappy and stressed and somewhere along the line it's become less of an outlet and more of a job... without the nice salary part! Other things have changed too - I used to read voraciously, always did, only now I seem to read other blogs (many of which I love, by the way), but I miss the newspapers, books and magazines too. As well as the time, I feel its all sucking up too much of my emotional energy, which leaves a whole lot less for the stuff that matters. A classic case of self induced burn out - hence the step back.

So I wanted to let you know my thoughts, even though I'm probably  flattering myself to think that you'd even notice my absence!  I'll still be here from time to time ...just on a less regular, more 'now and again' basis..like when genius strikes ...or I get a new pair of shoes and I'm hoping that you won't be a stranger and you'll still pop in to say hello.

I'm not one for big goodbyes so I'll  not go all tote emosh on you and that's not a tear in my eye. Let's just say, thanks babes and I'll see you when I see you - I suspect it'll be sooner rather than later - and in the meantime, look after yourself, wont you?
Love Emmaxxx

Ps I simply COULDN'T leave without showing you my gorgeous new summer shoes...soooo practical and quite deliciously  happen to match the scarf that I bought a few months ago...I suppose sometimes the accessories stars just align! 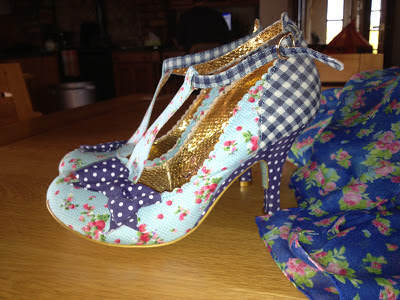