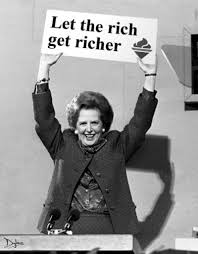 1. 'Ding Dong the witch is dead- apparently it could be number one in the charts this week, and there's an ongoing debate as to whether it would be morally right to play it. Is it? There's been street parties celebrating her death all around the country, and even murals scrawled on walls- a clever one locally is 'The Iron Lady- Rust in Peace'. Conversely, many are lining up to pay her tribute -she'll even receive a ceremonial funeral with military honours in Westminster Abbey, with the great and the good all there to pay their respects. Yes, even in death, she continues to polarize.
Personally, I had no love for her, but even though I disliked her politics, I used to believe that for a woman to reach the highest office in the land was a massive step forward for us all. I gradually realised though that this was a childish oversimplification on my part and entirely inconsequential -Thatcher was all about Thatcher and the fact that she was female was quite incidental.
We all felt her suffocating grip- Northern Ireland more than most- and for better or worse her legacy lives on. Despite that, I feel no joy in her death, and no wish to celebrate-she'd done her damage years before. So, no,  I won't be joining the street parties, or downloading 'Ding Dong the Witch is Dead' because as far as I'm concerned, she'll have to answer to a much higher power now....and that's all I really want to say about that. 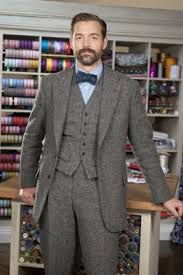 2. On a lighter note, it's shocking me how much I'm loving 'The Great British Sewing Bee', even though I'm barely able to hem a pair of trousers.   I may possibly have mentioned it before, but I was dreadful at HE in school and sewing machines still bring me out in a cold sweat, but that doesn't matter because,
a)  Patrick Grant (the Saville Row judge) is VERY easy on the eye, and as you might expect, sports a suit terribly well- if only our teacher had looked like him, or indeed simply been male, I'm sure I might have been better.
b) It's all about the folks on it- for instance, one is a HGV mechanic by day, and makes Victorian costumes for his family's weekend steam punk outings (??) by night! I mean, how interesting is that!
c) Best of all, watching other people mess up, is SO much more fun than doing it yourself. I'm slightly ashamed at how quickly I've become critical about a subject I know almost nothing about. I found myself shaking my head and heckling at the TV,  'Oh no no, that's faaar too baggy-you'll need another dart in that!' Or 'Now, that is definitely NOT a hidden fly- wait til Patrick sees that!'. A classic case of poacher turned gamekeeper, I'm afraid.

3. Luke has taken to adding a very serious 'Is that clear?' to the end of all his admonishments and instructions. (I can't think where he's got it from!) For example, he told me yesterday,  'I'm going in to look at our new washing machine again' (He's much taken with it) 'My pancake is on the table but don't you eat it! Is that clear?' Later he scolded ' Rory, if you do that again you're going to go to climb out (time out). Is that clear?' Our resident imperious mini dictator- I think I want him to stay almost three forever!

4. I went to my very first 80's tribute night last week with a few great (but equally pathetic) friends, where we happily boogied the night away. Unfortunately, I had a VERY embarrassing moment when I enthusiastically grabbed a stranger's bum at the bar...and I do mean a proper grab/ slap Benny Hill stylee. In my defense, he had his back to me and I was SURE the arse belonged to my gay friend, but when I explained this to my victim, it only appeared to add insult to injury. Awk-ward! Note to self- never, ever, grab another mans arse again, and especially not in public, unless you're married to him. It's far too risky and most likely completely inappropriate anyway.

5. Shamelessly,  I'm going use the last point as an excuse for yet another 80's tune as this week's Booster Seat Boogie. This was definitely a floor filler and it never fails to make me feel 16 again! Happy Friday lovely peeps xx