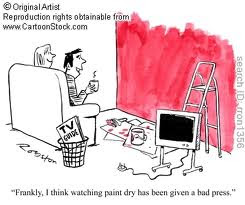 Changes are afoot this week. Almost as soon as we made the recent decision to remain living in the country, the scales fell from my eyes and  I realized that I simply couldn't live with the kitchen wallpaper a moment longer...or the sunroom...nor the hallway. So now, at this very moment, there's a whole lotta stripping going on!

Someone once confided to me, that in their (admittedly elevated) opinion, there was simply no luxury in paint, and that was clearly the view held by the previous owners here too. The problem is, that although their choice of wall papers may be fussy, its good quality and wearing irritatingly well as a result.

Combine that fact with my our prior plans to move, and suddenly there's absolutely no justification or motivation to make changes. So you live with it...and you live with it, even though its not you, and it annoys you, so then you just detach yourself from that bloody wallpaper...and then the whole bloody house as well, cos whats the point? We'll be leaving and it'll be someone else's problem anyway.


I know everyone has times when they're fired up and motivated to work on or redecorate their home, and other times when life's too busy, or money's too short, or you just can't be bothered.  For me, it was definitely a bit more than that though because when I had cut myself off emotionally from the
house, I had made it yet another another reason to leave.


Later, when the decision was reversed and we took the house off the market,  I knew almost instantly that I WANTED to bond with it again, to make it ours, and removing the previous owner's taste in wallpaper  became inexplicably important. No matter how superior or luxurious their taste might be, it ain't mine and I want this house to feel like mine again...I  want it to feel like home.

So finally, after seven years of living here, its goodbye fussy checked paper, hello 'soft white glow'. You see, it may be only a fresh coat of paint, but it feels suspiciously  like a fresh start. Is that silly? And maybe it IS too much to ask of a lick of paint, but it's a helluva lot cheaper and less disruptive that moving house, and I think that definitely makes it worth a try.


PS-I've joined up with Sarah Miles at Hello Wall today-go on over and take a peek at the rest!