1. Much as I adore shooting the breeze here with you, my lovelies, today I don't have much time so I gotta be quick. To start with, the kids are all off school and are high on Easter excitement and thoughts of Easter Sunday's impending chocfest. I've discovered several of the boys just gazing at their impressive stash of eggs with a certain far away look in their eyes-clearly lost in a reverie of unadulterated gluttony. Neil Young must surely have been thinking of Lenten promises when he sang ' Good times are coming, but they're sure coming slow.'

2. Speaking of which, I've been less than exemplar in regards to my own Lenten challenges. One by one they fell by the wayside, EXCEPT my self imposed Facebook ban, which truthfully, was the toughest of the lot for a l'il ol' social network queen like myself!
What can I say? The first week was the worst - I HATED being out of the loop- I mean, I'm still on Twitter obvs, (Sure, the Pope himself is on there!), but it's just not the same. After that tricky first week though, I got used to it and I'm glad that I did it...but no, I' won't be doing an about turn, and preaching on about how I now appreciate real life conversations and the old fashioned telephone so much more, because I don't. Truth is, I probably went on Ebay a bit too much, texted friends a good bit more, and now and again, peered over Loverboy's shoulder when he was on FB, but that's about it. Yes indeed, you can all relax now, because I'll be back again on Sunday with bells on, clogging up your news feed and generally making a nuisance of myself. (I can hear your groans from here!) 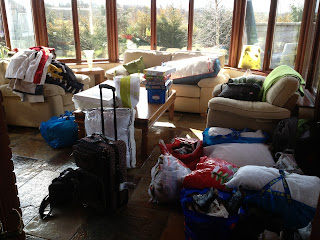 3. We're off to the caravilla for the Easter break. Now, I don't know how long we'll stay (possibly only a few hours if its REALLY Baltic), but its the first trip of the season, and that means MAJOR packing. Here's what our sunroom looks like right now AND I'm only halfway through, which is precisely why I'm dilly dallying around here chatting with you.
The real bummer is that even when the car and trailer are packed to the neck, and we set off like Duffy's Circus, the work's only half done. When we arrive, there's the caravilla to be cleaned, the unloading and unpacking to be done AND it'll be feeding time at the zoo again too.
As tempting as that sounds, I've a good mind to load them all up and quietly sneak back into the house- with a bit of luck,  they won't even notice I'm missing until they're over the border and I'm half through a bottle of Oyster Bay and the second series of Dallas.... a girl can dream!

4. Assuming that won't come to pass, I'm packing plenty of books, magazines, a 1000 piece jigsaw and the entire first series of 'The Killing' to bring up with me. Oh, and of course, wine, chocolate and ...my knitting. Or more accurately, my beautiful jewel coloured, Cath Kidston wool, with the metallic red knitting needles, (who knew!), presented in a beautiful 'book' tin.  Unfortunately, there's no actual knitting in there though,'cos I can't actually work out how to 'cast on'. I tried last Saturday night (party on, dude!) and despite reading the 'Knitting for DumbAsses' booklet from cover to cover, and desperately, SOS ing  Mr Google, I simply couldn't do it.After about an hour of trying, the terrible truth dawned- my horrible HE teacher was right all those years ago -I DO have special needs. (Specifically, 'senile' was her word of choice.)
I looked so forlorn that even Loverboy felt sorry for me, so HE asked Mr Google, and even with half a bottle of Cab Sauv in him, managed to cast on and was smugly clickity clacking away within minutes. Ouch! So, last chance saloon, I'm taking it with me to the caravilla, giving it one more go and THATS IT. Maybe I'm just not a knitter? Alternatively, I may start up my own Stitch 'n' Bitch , cos even though I might not be too good at the first bit, I flippin' excel at the other...even if I do say so myself.

5. Finally petals, I just wanted to say thank you for all the votes over the last weeks in the MADS. It's all done and dusted now until the Awards in Septemeber, and don't I have a wee trip to London to look forward to now, thanks to y'all. So, win or lose, thanks to you, I'm feelin' the love.
Oh, and a very Happy Easter too- whatever you get up to, may chocolate play a major role.(Easter wishes don't come much better than that now, do they!)

6. Finally finally, I'm renaming Luke's 'Boogie in the Car Seat' to 'Booster Seat Boogie', (on account of him reaching this vehicular milestone). Now, I know I've gone a bit 80s on you the last few weeks, and to prove  I was waaaay cooler than that, I was all set to treat you to David Guetta's 'Titanium' (which incidentally I love walking to!)... but then this came on the radio and I was lost-it used to literally gives me goose bumps back in the day. Turns out, I'm not remotely cool after all....but you knew that. Enjoy-you can thank me later. Happy Easter peeps xxx

Email ThisBlogThis!Share to TwitterShare to FacebookShare to Pinterest
Labels: All I wanna do is make love to you, Cath Kidston, Dallas, Easter, Ebay, Heart, Lent, Northern Ireland, Oyster Bay, parenting, The Killing