1. Now,  I know I'm a bit behind everyone else here- I was playing catch up on the Sky+-but did you see the season finale of 'Mr Selfridge'? What about that dirty dog Groves? Talk about having your cake and eating it! Never has a character gone down in my estimation so much. Poor Miss Mardle-she gave her best years to him and he turned out to be a cad and a bounder! ( See-I'm completely in the zone, insult wise). I'm just so glad she held on to her last shred of dignity and told him to sling his hook in the end. She's well shot of him and I'm just hoping that he gets in comeuppance in season 2. ( There I go again! Comeuppance-a most versatile, yet tragically underused word. )

2. Staying on the TV theme for a moment, I seem to have developed a bit of a girl crush on Mary Berry after watching her two part life story. Although in relation to Ms Berry, it seems tote inapproprope to even call it a girl crush- a lady crush just seems much more fitting.
The elegant way she pops a teeny tiny forkful of something yummy into her mouth, declares it delicious...and then puts that fork down! And you know looking at her that she's won't be sneaking back to fill her Tupperware with the leftovers. No indeed, she's seamlessly moved on, already detached from that plateful and on to the next delicious mini-bite.
No way could I do that in a million years! As soon as that camera was turned off,  I'd be shoveling that Victoria sandwich into me like it was going out of fashion, and then covering the rest with cling for later. Born greedy, I'm afraid, and just one of a whole myriad of reasons why I'd never be asked to do a cooking show.

3. Speaking of which, inspired by Mary Berry, I dug out my Aga book, which was written by the woman herself and shamefully underused. When we moved here, I inherited the Aga but I just didn't 'get it' at all. It seemed temperamental, over rated, and unreliable, but  gradually over the years I've grown to love it...just like everyone said I would. Now we're moving, but sadly the Aga isn't, so better late than never I'm getting stuck into a few of Mary's recipes.
For example, would you believe that I'd never made a lasagne before? Shocking, I know. Someone once told me it was very complicated and that put me right off and anyway, we used to live near a bakery that sold the most gorgeous 'home made' ones at a very reasonable price, so of course I reasoned, 'Why bark when you've got a dog?'
But I was inspired when I saw Mary B make it, so I used her recipe and made it myself, took a little teeny weeny forkful and pronounced it tote amaze! (I know what you're thinking-self praise is no praise at all, but it WAS delish!) The moral of the story? Don't be scared by lasagne or any other recipe-just go for it. (Except possibly if it has the word 'terrine' or 'roulade' in the title- that IS scary.)

4. Its 'Helping Others Day' in school today- a day entirely focused on the children raising money for Trocaire- a most worthy cause. There's all sorts of activities going on- Cormac made Shreddies buns last night (a little twist on Rice Crispies), to sell in the tuck shop, and the school has called an amnesty on all Lenten promises for the day.
There's the tombola stall, where Cormac was delighted to win a travel iron several years ago, and the jumble sale where the children enjoy buying back not only the old tat that I've donated, but other people's tat as well. For instance, last year Rory was delighted to gift me with a rusty colander, which unbelievably, he'd actually outbid someone else for.
There's also lots of sponsored activities going on- Rory's class is doing a sponsored hop, skip and score. (No I'm not sure what it is, either.) What I do know,  is that it involves exercise which isn't Rorys bag AT ALL, so when he brought home his sponsorship sheet he announced he wasn't doing it.
'Teacher said you don't have to!', says he. '
Oh indeed you are!' I told him. 'It's your duty to raise as much money as possible for Trocaire..etc etc'.
It turned out he didn't want to miss all the 'fun', which on further investigation translated as 'chocolate'. He actually argued that he could raise more money spending all his pocket money in the tuck shop- essentially doing a sponsored 'eat'. They say that God loves a trier...but he's still hop, skipping and scoring, as well. 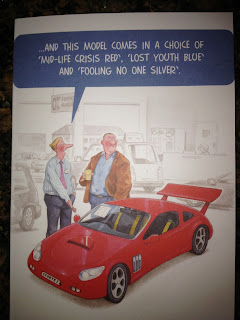 5. It was Loverboy's birthday during the week- he got quite a few cards, including a beautiful home made one from Anna and a  regifted Tigger one from Rory, who just rubbed out his best friend Lara's name, and inserted his own.(Simple but effective.) My personal favourite though was this one from our good friends N and P..... Well it made me laugh!

6. Finally, this weeks boogie in the car seat. Given the hideously awful weather today (snow- WTF???) it had to be something upbeat and happy. So here's a little bit of summer for you-Take it away Katrina! Happy Friday peepsxxx


PS If you haven't already, please take a moment and vote for me in the Family Life Category of the MAD Blog awards before 26th March- Thank you so muchxxx