1. Well, obviously the big news this week is our newly elected pontiff- Pope Francis I. I know I shouldn't say this, but I never really warmed to old Benny Boy, (although kudos to him for stepping down as he did). I suppose John Paul II was the Pope I've grown up with, and there were the great memories of travelling with the rest of Ireland to see him in 1979. He really was a tough act to follow.
That said, I know it's early days but I'm definitely feeling the love for Pope Francis- I like the fact he's Latin American and wasn't a front runner for the job. I like that he lives in a wee apartment and cooks for himself and catches the bus to work. It just seems so normal and down to earth, and that's got to be a good thing for a pope to be, surely? I mean, can you imagine Cardinal Ralph de Bricassart in his flowing red robes, heating up his own tin of beans or standing at a bus stop in the rain? I think not. (I know, I know, The Thornbirds isn't actually real life but still!)

2. Staying on the holy theme, it's St Patrick's Day on Sunday!! Which of course means the wearing of the green, the pinning on of shamrock wrapped in tinfoil, and the annual rendition of 'Hail Glorious St Patrick'. Around ours, it also means fake beards, huge green glasses and leprechaun hats, and this year I've gone wild and bought light up green dicky bows for the boys as well. Yes indeed, I  like to think that as a family, we inject a little class into our patron saint's feast day.
Traditionally of course, it's also a day of amnesty from Lenten promises, although I'm afraid I haven't needed any excuse to break mine. In fact, the only one that I've done properly thus far, is removing myself from  Facebook, and really do I want to spend St. Patrick's Day frantically catching up on my messages and status alerts? That seems a wee bit sad, and Easter's just around the corner anyway so I think I'll just be strong and stuff myself with cream eggs instead.

3. We got our septic tank emptied this week. Yes, you read it right. Along with our very own electricity generator for the delightfully unexpected occasions when the power goes out, we country folk are blessed with our very own personal septic tank. You know exactly where it is too, because the grass above the pipe running to it, tends to be more green and lush than the rest- basically there's a big furry giveaway stripe across the lawn. Anyway, the man came in his tank to empty it, and we had to keep all the windows and doors closed because the smell would knock you out. Very nice.( Between that and the annual spring slurry fest, there's two 'good country smells'  I must pop onto my 'cons' list.)
On a side note, can you just imagine having the job of driving and operating a septic tank emptying lorry? I mean I'm sorry but no, just no. If I were single and dating I'm afraid that would definitely be a deal breaker -it wouldn't matter how gorgeous/ kind/ loving a man was-if he emptied septic tanks for a living, I'd be outta there before you could say 'human waste'.....and I don't even care if that makes me a bad person. 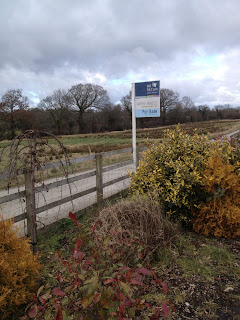 4. Our 'For sale' sign went up this week and even though I knew it was coming, when I saw it, it was like a kick in the gut. Then, needless to say, I flew into a blind panic of guilty anxiety about the whole move all over again.....Loverboy said it was a speed wobble and to screw my courage to the sticking point and he was right. By the next morning , the worries were still there but they were mixed with relief that the decision was made at last and the ball was rolling. I predict more similar panics ahead- when you hold the welfare and happiness of  seven people in your hands, that's pretty much a given, but we'll take it one step at a time and hopefully we'll get there.

5. Speaking of Loverboy, it's his birthday next week and I don't know what to get him. Bear in mind, this is a man who shuns clothes as presents- he's like an eight year old  - his expression clearly says 'Okay, I'll have my real present now.'
It's the same with male grooming- I once got him a hair and facial package and he only went because I told him I wouldn't go on holiday with him if he didn't. Then he told the girl just to cut his hair and skip the facial, and when he got home he behaved as if he'd done ME the favour!  The evil part of me wants to 'surprise' him with a 'manscaping' voucher, and just let on it's for a haircut, but he'd get the hell outta Dodge as soon as he spotted the hot wax, so it would just be (shoe?) money down the drain.
So then I thought I'd help him by suggesting useful present ideas-
'What about a new vacuum cleaner - one of those Henrys, or I could really push the boat out and treat you to a Dyson? Brilliant suction- you'd have the hoovering done in half the time!'
'Or what about a new generation washing machine with a 12kg drum? They've great reviews and lets face it,  you'd get the benefit of it every day? Truly a a gift that keeps on giving, surely?' (It was worth a punt!)
But no, he just laughed scornfully and told me it would be a cold day in hell when he'd get a household appliance for his birthday, but he'd certainly make sure he treated me to one when my birthday rolled round in July.  (Note to self- nip that little idea in the bud as soon as, or my 'helpful brainstorming' session could seriously backfire.) So anyway, have you any ideas? They couldn't be any worse than mine and I'd be most grateful...

6. Car seat boogie- it has to be 'Ireland's Call' this week for obvious reasons, and just because it always makes me go all teary eyed. I know now that it's a rugby song, but I didn't know that when Jude had to learn it in school and we made him sing it at every family gathering.  Now, I actually  love it so much that I've adopted it as kind of national anthem, free from baggage and negative connations. A bit like Billy Connolly and The Archers theme tune! Happy St Patricks Day, one and all. EmxXx