1. Loverboy's home!! Yay!! Well, sort of anyway because actually, he's completely wrecked, seriously jet lagged, (translation- utterly useless in all departments), so I'm letting him get some kip. Poor pet, he's been flat out- up for 24 hours, flown across the world, and STILL I expect him to lock up and put the bins out. Actually scratch that, because if I'm REALLY honest, part of me is like 'Eh hello? You're exhausted? Tell me about it, Sunshine! A ten hour flight, a meal on a tray, and a few movies back to back, sounds like a walk in the park to me, so rest up now Babe, cos tomorrow you're SO hitting the ground running!' (Yikes, that's harsh-did I just say that out loud?) 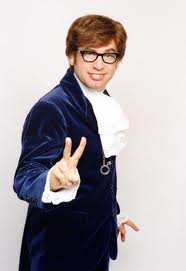 2. I had a MOST embarrassing moment in Zumba last week.(And no, this time it had nothing to do with pelvic floors and Tenalady thank you very much) Our gorgeous, hip and so-young-I-could-have-given-birth-to-her-Zumba teacher was showing us fresh moves during a high energy routine.
Now, I'm quite sure that it's no shock to hear that I'm a slow learner when it comes to 'getting' these routines? Yes, it's PE all over again, but this time, I had swotily positioned myself up at the front, so that I could make a passable attempt at mirroring her every salsa thrust and wiggle.
In fact, I was just congratulating myself on how well I was keeping up, when she randomly threw in what I took to be a funky, double handed peace sign a la Austin Powers, so obviously, I enthusiastically, (and repeatedly), sent those peace vibes right back at her........only for it to gradually dawn on me, as I glanced around, that she was, in fact, signalling for a particular step to be done twice.
The thing is, no one would even have noticed if I'd been in my usual position down the back, which just goes to show that I was right all along about exercise-you can be too motivated for your own good!

3. A boy resident  peed in our bidet this week. (By the way, don't EVER consider getting one (the bidet, NOT the boy) because they're completely pointless). Of course, I immediately called all four boys to the scene of the crime and confronted them, but was met with outright,(and in one or two cases, even slightly offended) denials. I strongly suspect it was the handiwork of a certain potty trainee, heady with his recent successes and  understandably confused by its similarity to the loo. 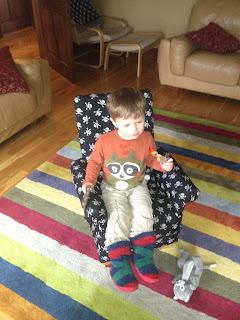 4. Tenuously staying on that theme for a moment, here's a little pic of that same boy relaxing in his armchair, with a well earned snack, after a job well done. In case you're wondering, that's actually a fake poo in his other hand. (Yes indeed, unfortunately we DO have these sorts of things just lying about here, and as you can imagine, that fake poo really came into its own during recent potty training).

5. I was just wondering if you would do me a favour? I can hardly believe that they've  rolled around already, but nominations for the MAD Blog Awards have started again. Thanks to you, I had SUCH fun last year going to London for the Awards and meeting up with all the other bloggers, and then when I actually ended up winning,  I thought I'd died and gone to heaven! 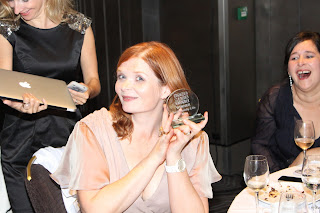 Now, you've gone and given me a taste for it, so if you DO enjoy reading my nonsense and would consider nominating me in any of the categories you think are suitable, I'd really appreciate it. (Last year I was shortlisted for 'Blog of the Year' and 'Family Life', but you can do any or all that you think are applicable). The blogs with the most nominations then go through to the next stage so I'll keep my fingers and toes crossed that I'll be lucky again! Just click here- it's dead easy and will only take a minute or two and I'll be ever so grateful! Thank you and Happy Friday, my lovelies! Emxxx